Shashi Tharoor rejects charges against him 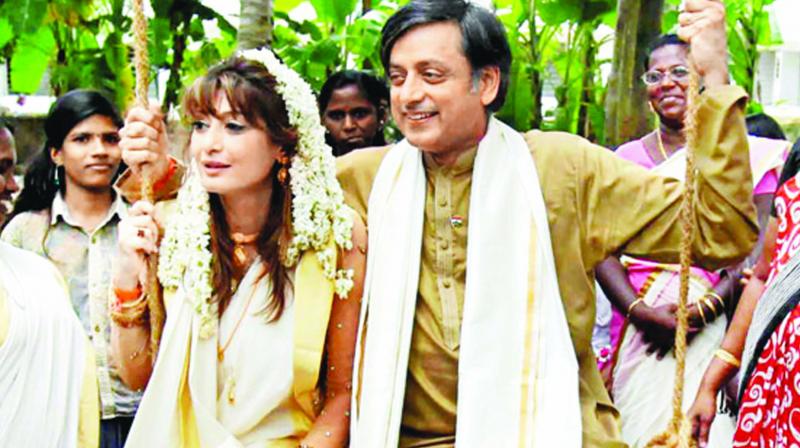 New Delhi:  Soon after a Delhi court summoned him in a case relating to death of his wife, Congress leader Shashi Tharoor on Tuesday dubbed the charges against him as “preposterous and baseless” and the product of a malicious and vindictive campaign against him that he will vigorously contest.

In a statement, he said, he maintains steadfast conviction that ultimately the truth will prevail through the judicial system.

“I would like to reiterate my position that I find the charges preposterous and baseless, the product of a malicious and vindictive campaign against myself.

“I will continue to vigorously contest these charges and maintain steadfast conviction that ultimately the truth will prevail through the judicial system that we are privileged to have in our country,” he said.

He, however, refused to speak further and urged the media to respect his and his family’s right to privacy as the matter is sub-judice.

“I will refrain from commenting on this issue further until such time as the next scheduled hearing of the case,” he said.

Mr Tharoor said he has taken note of the developments in the case being heard by the Patiala House Court in relation to the circumstances surrounding the death of his wife Sunanda Pushkar.

He said from the very start, he has fully cooperated with the investigating team and continue to maintain that due legal process must be followed in all aspects related to this case.

His remarks came soon after the Delhi court summoned him on July 7, saying there were sufficient grounds to proceed against him.

“I have heard the prosecutor. I have gone through and perused the charge sheet and the documents filed along with it. On the basis of police report (charge sheet), I take cognisance of offence of abetment of suicide of late Sunanda Pushkar and committing cruelty upon her by Shashi Tharoor,” the judge said.

“There exists sufficient grounds to proceed against Mr Tharoor for commission of offences of Section 306 and 498 A of IPC. Issue summons to him for appearance for July 7,” the court added.

The Police had on May 14 accused the Lok Sabha MP from Thiruvanantha-puram of abetting Pushkar’s suicide and told a city court that he should be summoned as an accused in the four-and-half year-old case, claiming there was sufficient evidence against him.

Jan. 15, 2014 Sunanda and Shashi Tharoor fly from Kerala to Delhi

Jan. 16 Tharoor’s checks into the hotel, they shift to suite 345. Sunanda calls up her friends, including Nalini Singh, informing her about Shashi Tharoor’s alleged affair with Pakistani journalist Mehr Tarar.

Sunanda found dead
Jan. 17 Sunanda Pushkar found dead at Leela Palace Hotel, a day after she was involved in a Twitter spat with Pakistani journalist Mehr Tarar over the latter’s alleged affair with her husband Shashi Tharoor

Jan. 21 The SDM who was heading the inquest says Sunanda died of poisoning. The SDM, in his report, had said Sunanda could have died in “just three ways, homicidal, suicidal and accidental’ and the police should investigate further to ascertain the reason of her death

Jan. 23 The probe into the death of Sunanda transferred to the crime branch of Delhi police

Jan. 25 Case transferred back to the Delhi police

Jan. 15, 2016 The police receives AIIMS medical board’s “advice” on the FBI lab report on viscera samples of Sunanda to identify the cause of her death. Her viscera samples were sent to the FBI lab in Washington DC in February 2015 to determine the kind of poison that killed her after an AIIMS medical board identified poisoning as the reason behind her death but did not mention any specific substance

April 20 The police, in its affidavit in the apex court, says a draft final report has been prepared after conducting ‘thorough professional and scientific investigations’ in the case

May 14 The police files chargesheet in the case