Hussain moved the surrender application before the court saying that he was willing to join the investigation and wanted to surrender in the case. 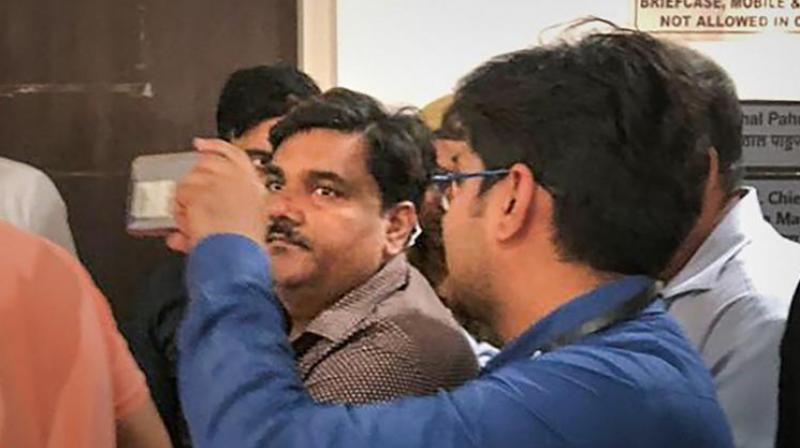 New Delhi: Just after a Delhi court on Thursday dismissed a plea seeking surrender by suspended Aam Aadmi Party councillor Tahir Hussain, the Delhi police arrested him and took him into custody. Hussain is charged with the alleged killing of Intelligence Bureau staffer Ankit Sharma in northeast Delhi.

On Thursday, additional chief metropolitan magistrate Vishal Pahuja rejected Hussain’s plea saying that the relief sought by him was outside its jurisdiction. Hussain moved the surrender application before the court saying that he was willing to join the investigation and wanted to surrender in the case.

The court said that as per the provisions of Section 177 CrPC (ordinary place of inquiry and trial), the offence shall ordinarily be inquired into and tried by a court within whose local jurisdiction it is committed.

Advocate Mukesh Kalia, appearing for Hussain, said there was a grave apprehension of threat to his life and therefore he has not surrendered before the competent court as there is “a charged environment” in the Karkardooma district court. He said Hussain had no connection or involvement in the FIR registered by the police and he was being falsely implicated. Considering the gravity of the situation, Hussain wishes to surrender before the court, he said.

The court said the Delhi high court has specifically made a division of the jurisdictions, be that of police stations or courts district-wise and work has been allocated accordingly. It said: “This court is a special designated court dealing with the matters of MPs/MLAs. The high court has designated this court as a special court to deal with cases on fast track with endeavour to dispose of the same within one year as its objective.

“The applicant does not fall in the aforesaid category, hence this application cannot be even entertained by this court.”

The court further said the relief sought by Hussain does not fall within the domain or jurisdiction of this court, “hence, no such relief can be granted. In view of the observations, the application deserves to be dismissed”.

As the court dismissed Hussain’s plea, a Delhi police team, which had already arrived, arrested him and took him into custody. Hussain moved the surrender application before the court, saying he was willing to join the investigation and wanted to surrender in the case.

Hussain has been booked in the murder case of the IB staffer in northeast Delhi amid violence over the new citizenship law last week. Delhi’s ruling Aam Aadmi Party had then suspended him for alleged involvement in the violence, which has left at least 47 people dead and around 200 others injured.

The family of Ankit Sharma (26), who was found dead in a drain near his home in northeast Delhi’s riot-hit Chand Bagh area, accused Hussain of being behind the killing. On the complaint of Sharma’s father, the police registered an FIR against Hussain, who has rejected the charge. Communal clashes had broken out in northeast Delhi after violence between anti-and-pro-Citizenship (Amendment) Act groups spiralled out of control.

The Delhi police has decided to record the questioning of Hussain on video. His questioning will focus primarily on the events of February 23 (when the first round of clashes erupted) till February 25 (when Ankit Sharma was killed and northeast Delhi witnessed the maximum violence).

On Thursday, after two hours of questioning, Tahir said he was a victim whose house had been attacked. He said he went to the terrace after his workers told him that his house could be set on fire.

The crime branch will confront him with video evidence of February 24, and also a forensic report which said that petrol bombs and acid bottles were thrown from his house. Tahir, who claims that he was not in the house on February 25, will be examined by officers who have recorded the statements of Ankit’s family members and others. Tahir will also be quizzed about his support to the anti-CAA protests, which turned violent on February 24, and saw policemen being attacked, and a head constable was murdered. This protest took place very close to his residence.