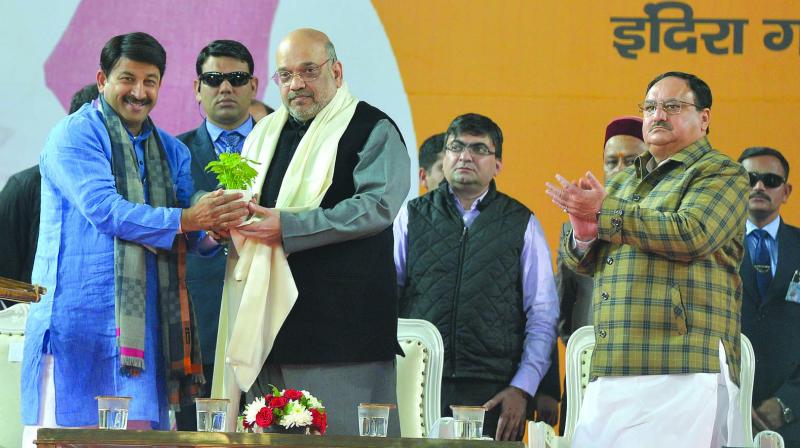 New Delhi: Exuding confidence that BJP would form the next government in Delhi under the leadership of Prime Minister Narendra Modi, party chief Amit Shah, on Sunday, accused chief minister Arvind Kejriwal of riding to power by “misleading” voters with a host of promises and not fulfilling any of them.

Addressing BJP’s booth-level workers’ rally at the Indira Gandhi Indoor Stadium, Mr Shah said, “One can mislead people once but not all the time. BJP will come to power in Delhi under the leadership of Prime Minister Narendra Modi.”

Notably, BJP has been out of power in Delhi since 1998.

In a no-holds-barred attack on Mr Kejriwal, Mr Shah accused the AAP supremo of “wasting” public money on advertisements and misleading people. He also sought to know whether the AAP government has completed any work in the last five years.

“He (Kejriwal) promised 20 colleges; I cannot see any even with binoculars. He promised 5,000 schools but they are not visible even with spectacles,” Mr Shah said and asked the party workers to ensure that BJP stages a comeback in Delhi after a gap of 20 years.

Mr Shah raised issues like anti-Sikh riots and construction of Ram temple in Ayodhya besides the Citizenship Amendment Act (CAA). He accused Congress of failing to provide relief to the victims of the 1984 riots and of opposing the Ram temple at Ayodhya.

Listing the various works done by the Modi government in Delhi, including construction of eastern and western peripheral expressways to reduce pollution, expansion of Delhi Metro, property registries in unauthorised colonies, and redevelopment of slums, Mr Shah hit out at the Kejriwal government for falling short of fulfilling his promises on various fronts.

Mr Kejriwal tweeted, “I heard the entire speech of home minister Shri Amit Shah. I had thought he would point out the shortcomings in our work and talk about Delhi’s development. But all he did was abuse me. If he has suggestions for Delhi, he should share them. We will implement good suggestions in the next five years.”

Urging the party workers to undertake door-to-door campaign to take BJP’s message to the people, the party president said he will himself take part in the ‘mohalla sabha’ campaign in the national capital.

BJP working president J.P. Nadda said his party is the only one that is free from dynastic politics and based on ideology.