As the skies hung heavy and acrid over the region, people complained of itchy throat and watery eyes 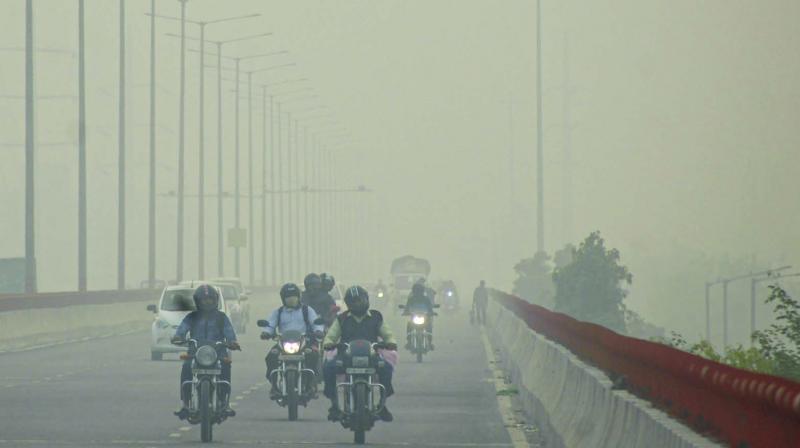 New Delhi: A layer of haze lingered over the national capital and its suburbs on Thursday morning, with raging farm fires and a fall in the wind speed and temperatures pushing air quality to the worst levels in around a year.

As the skies hung heavy and acrid over the region, people complained of itchy throat and watery eyes.

PM10 is particulate matter with a diameter of 10 micrometers which is inhalable. These particles include dust, pollen and mold spores.

The levels of PM2, finer particles which can even enter the bloodstream, were 347 µg/m3. PM2.5 levels up to 60 µg/m3 are considered safe.

On Wednesday evening, the noxious haze reduced visibility to merely 600 metres at the Safdarjung Observatory, smudging landmarks from view. It was 1,200 metres on Thursday morning.

If this was not enough, a large number of people across Dehi-NCR burst firecrackers to mark the festival of Karwa Chauth.

"People are bursting crackers and it is not even Diwali yet. The city has already become a gas chamber. This happens every year. For how long will this continue," asked Shiv Shrivastava, a resident of south Delhi.

"I can feel the pollutants in my throat despite wearing a mask. My eyes are burning. It is going to make the pandemic worse. I am scared," said Piyush Vohra, a resident of Jangpura.

According to the India Meteorological Department (IMD), the maximum wind speed was 5 kilometres per hour on Thursday morning and the minimum temperature 11.2 degrees Celsius. Calm winds and low temperatures trap pollutants close to the ground, while favourable wind speed helps in their dispersion.

Health experts said that during the COVID-19 pandemic, air pollution has become a serious health concern for about the two crore residents of the national capital.

According to a doctor at the Sir Ganga Ram Hospital, intake of every 22 micrograms per cubic metre of polluted air is equivalent to smoking a cigarette.

IMD officials said sudden change in the wind pattern led to "subsidence" -- the downward movement of air over a large area when it cools and becomes heavier.

"The wind speed slowed down suddenly after 10 am in the Delhi-NCR region. The temperatures have dipped alarmingly over the last few days," V K Soni, the head of IMD's environment monitoring research centre, said.

The haze was primarily smoke from stubble burning in Punjab and Haryana. Unfavourable meteorological conditions trapped it in Delhi-NCR, he said.

All the 36 monitoring stations recorded the air quality in the ''severe'' category.

Stubble burning accounted for 40 per cent of Delhi''s pollution on Sunday, the maximum so far this season.

Last year, the farm fire contribution to Delhi's pollution had peaked to 44 per cent on November 1, according to SAFAR data.