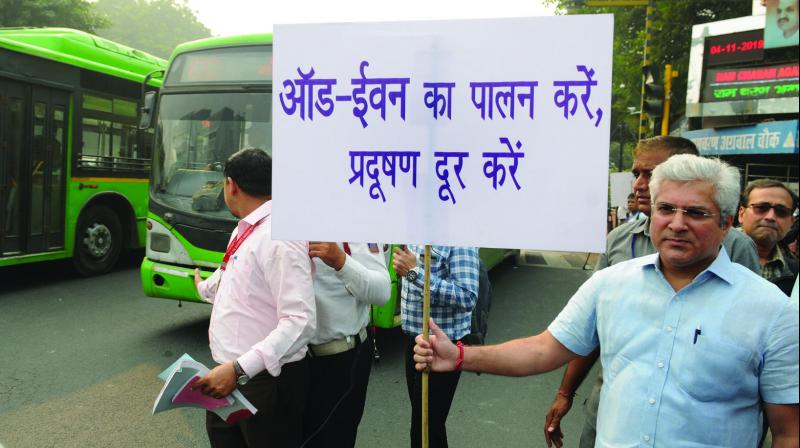 New Delhi: On the first day of the third edition of the odd-even scheme in the national capital, Delhiites had a major relief from the smog which has turned the city into a gas cham er.

The scheme, which was introduced and implemented by the Delhi government on Monday, has reduced the number of vehicles on the roads.

As the scheme came into effect, a lot of city residents chose carpooling over taking cabs to work.

Many took to social media platforms like Facebook and Twitter to inform others that their cars were available for pooling and various ridesharing mobile applications offered discounts.

The anti-pollution measure kicked in from 8.00 am in Delhi and chief minister Arvind Kejriwal urged people to follow the scheme for the sake of their family and children.

Under the scheme, apart from the exempted categories, only those non-transport four-wheeled vehicles will ply on the roads which have registration numbers ending with an even digit. The overall air quality index (AQI) of the city at 7.30 am stood at 439, which falls in the ‘severe’ category.

“Do follow odd-even for the sake of your health, your children’s health and your family’s breath. Share car, this will help increase friendship, build relationships, save petrol, and reduce pollution,” Mr Kejriwal wrote on Twitter.

He also appealed to auto and taxi drivers not to overcharge commuters and urged them to take part in the scheme.

Over 600 teams of the Delhi traffic police and the transport and revenue departments have been deployed for a strict implementation of the scheme across the city. Under the scheme, which will be implemented from 8.00 am to 8.00 pm till November 15, non-transport four-wheeled vehicles with registration numbers ending with an odd digit will not be allowed on the roads on November 4, 6, 8, 12, and 14.

Similarly, vehicles with registration numbers ending with an even digit (0, 2, 4, 6, and 8) will not be allowed on the roads on November 5, 7, 9, 11, 13, and 15. Two-wheelers and electric vehicles have been exempted from the restrictions, but not CNG vehicles. Women-only vehicles with children aged upto 12 years and vehicles occupied by physically-disabled are exempted.