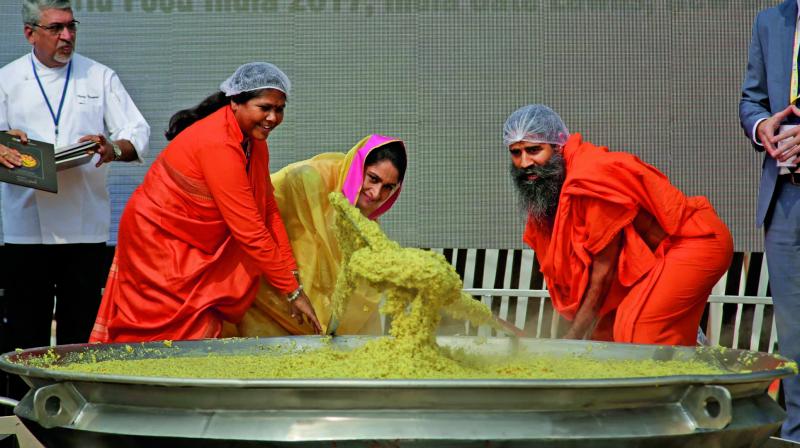 New Delhi: Swadeshi dish khichdi might not be branded as a national dish, but, for the ruling government of the day, it symbolises “India’s unity in diversity” since it is “eaten by both the rich and poor”.

Yoga guru baba Ramdev made the “tadka” for the grand preparation of 500 kg rice, 200 kg moong dal, other millets and vegetables with 30 kg ghee.

Celebrity chef Sanjeev Kapoor supervised the mega preparation, which started as early as 4 am. Later in the evening, India set a Guinness world record by cooking 918 kg khichdi, which was prepared by a team of 50 chefs at World India Food event organised at India Gate.

It may be recalled that in 2015 local RSS workers had organised a feast offering khichdi to the residents of Harijan Basti in Bhullanpur area in Varanasi, Prime Minister Narendra Modi’s constituency, on the occasion of Makar Sankranti.

“Prepared in every household across the nation, khichdi symbolises India’s ‘unity in diversity’ and is our grand preparation is our presentation to the global food platter,” Union minister for food processing Harsimrat Kaur Badal said with enthusiasm. The dish was prepared in front of the live audience comprising ministers, delegates, ambassadors and scores of food lovers.

“Delicious, the taste cannot be expressed in words,” the minister remarked after tasting the dish. “It contains India’s love and chef Kapoor’s magic,” she said.

“The attempt is to make khichdi popular, which is prepared in each and every home — among rich or poor. Once in a while you can enjoy dishes from other countries but you cannot separate khichdi from Hindustanis,” she added. For her, “with health and wellness being promoted extensively, khichdi becomes the brand ambassador of nutrition because of its ingredients.”

The giant wok in which the dish was prepared weighed 300 kg. After preparation the total weight clocked 1,262kg.

Chef Kapoor, who curated the street food concept. said, “The dish has been prepared using all the traditional items, including rice, dal, jowar, bajra, rabi, jeera, heeng, masala, vegetables and immense love from the nation. The dish is rich in nutrients and thus is a great way to fight malnutrition in the country. It is an offering to the world from India.”

Eleven volunteers of the Akshaya Patra foundation were involved in the massive scale cooking and the dish was served to about 60,000 people.