The EDMC has around 16,000 workers, half of whom are permanent employees. 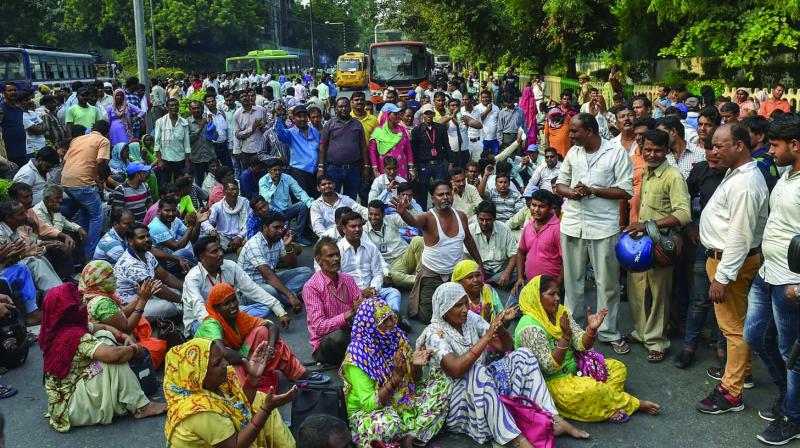 NEW DELHI: The striking sanitation workers of the East Delhi Municipal Corporation (EDMC) on Thursday staged a protest near the residence of  chief minister Arvind Kejriwal to press for their demands, following which the AAP government charged the BJP with playing dirty politics.

The sanitation workers of the cash-strapped EDMC, ruled by the BJP, have been on strike since September 12, demanding payment of their pending salaries and regularisation of contract workers.

“Sanitation workers are protesting outside my residence. BJP has misled them. I am going to talk to them and present facts before them. I am really worried about the sanitation arrangements in the city and the workers. They have to protest every two months to get their salaries,” Mr Kejriwal tweeted.

Mr Kejriwal also met representatives of some organisations of sanitation workers, and placed facts related to funds released by the Delhi government to the municipal corporations.

“In 2014-15, when Delhi was under the President’s Rule, EDMC was given Rs 396 crore out of which Rs 45 crore was deducted as recovery of loan. During 2017-18, the Delhi government provided Rs 724 crore to EDMC and no interest on outstanding loan was deducted,” according to a Delhi government statement.

“How is it possible that EDMC, which could pay salaries in 2014-15 in half the funds that it got from Delhi government then, now says it is unable to do so when it is getting almost double the amount?” it said.

The EDMC has around 16,000 workers, half of whom are permanent employees.

The BJP-led EDMC on September 26 had decided to begin the process for permanent employment of contractual sanitation workers who were recruited after March 31, 1998.

The president of MCD Swachhata Karmchari Union, Sanjay Gahlot, however, had said that since there was no assurance of this resolution reaching its desired end from the authorities side, they would continue their agitation in East Delhi.

The government also alleged that money provided to EDMC was being “diverted” for payment of contractors.

It also questioned the Centre why it was not providing Delhi Rs 488 per person grant which it was paying to other civic bodies in the country, as per 14th Finance Commission recommendations.