Kanganheri is a village spooked after three of its women reported that their braids had been chopped while they were sleeping. 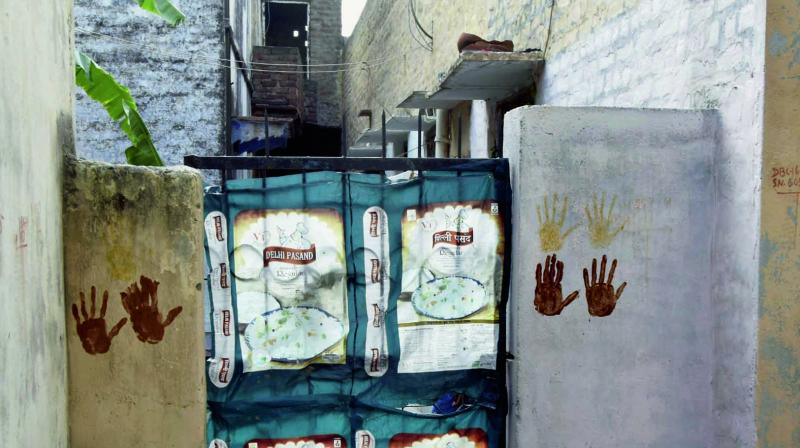 Residents apply hand impressions of turmeric and cow dung paste outside their house, out of fear of braids being chopped, in Kanganhari village of New Delhi on Thursday. (Photo: PTI)

New Delhi: Deserted roads, empty classrooms and shuttered doors behind which hide women and children too scared to step out. Kanganheri is a village spooked after three of its women reported that their braids had been chopped while they were sleeping.

The village on the edge of Southwest Delhi separated by not just a few kilometres but an entire world from the plush malls and much vaunted higher educational institutes of the national capital is not alone in its panic.

It started off with isolated reports of women’s hair, particularly braids, being chopped while they were sleeping or unconscious. But the numbers are increasing each day with some 30 odd cases being reported, mostly from villages in Rajasthan, Haryana, Delhi and Western Uttar Pradesh.

Bogeyman, black magic or good ol’ thievery, the theories are many as the hysteria spreads, blurring the boundaries between superstition and crime in a largely rural belt. In Kanganheri, like in other villages, the discourse centres around black magic and sorcery after three women became unconscious following a splitting headache and woke up with their braids on the floor.

Suspense and fear hang heavy in the air with most villagers not sending their kids to school and women confined to their homes. Manoj, whose 55-year-old mother Sridevi, lost her hair, is convinced the police is simply trying to put the blame on a person while it is in fact “Bengali black magic” in play.

“For one moment, I will believe that it is a man roaming around cutting women’s braids, but how do you explain the same thing happening at so many places simultaneously?” asked the 32-year-old. Sridevi, he said, had complained of a headache after returning from feeding cattle in the neighbourhood. When she woke up from a nap, her hair was gone.

“Bhagat ji”, an astrologer, was the go-to man. He told Manoj that a tantric from Bengal had sent his followers to “bind the village inside a magical circle”. “My mother, who is active usually, is feeling so weak now. The tantric has stolen her strength from her body through her braid,” Manoj, who runs an electrical repair shop in the village, told PTI. Most villagers have covered the outside walls of their homes with henna handprints, along with the lime, chillies and neem leaves to ward off evil spirits. Roshanlal Yadav, whose wife Munesh Devi, also 55 like Sridevi, found her hair cut, said they don’t want to leave anything to chance.

“Some elders of the village told us to put handprints, then somebody said wash them off. And some others said hang neem leaves on the entrance, we are doing everything that can be done,” he said. Fantastical stories including one of a woman seeing a cat turning into a person before she lost consciousness and another seeing a man in red-yellow clothes carrying a trident - have been doing the rounds in the belt. As the delirium spreads with the supernatural dominating the discussion, police and psychologists are weighing in with their theories. The theft theory doesn’t seem to work because family members of the victims said nothing had been stolen.