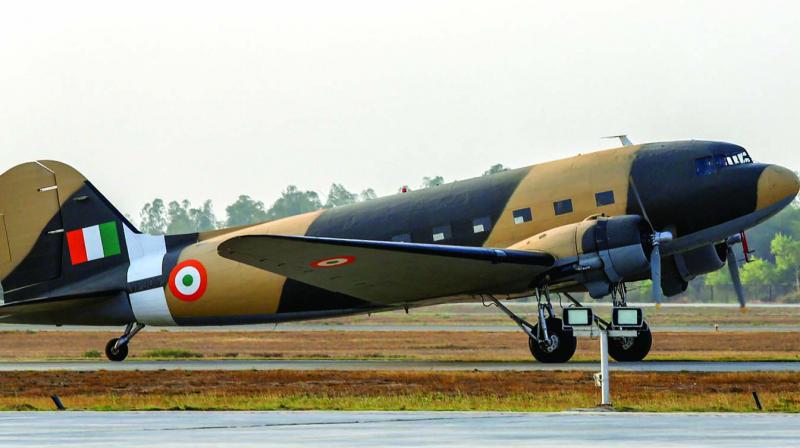 New Delhi:  A restored Dakota joined the Indian Air Force (IAF) on Friday in an induction ceremony at Hindan air force station, more than four decades after the aircraft fleet was phased out following an illustrious service record.

The Dakota DC-3 VP 905 was formally inducted into the IAF at a grand ceremony at Hindan where a key was received by the Chief of Air Staff Air Marshal B.S. Dhanoa from Air Commodore (retd) M.K. Chandrasekhar whose son and Rajya Sabha MP Rajeev Chandrasekhar bought and restored the aircraft.

Air Marshall Dhanoa dubbed Dakota as a “special” aircraft in the history of the IAF, adding that its “reliability and ruggedness" were proved by its journey back home from the UK where it was restored.

Dakota was bought by the MP from "scrap" and got restored in the UK.The restored Dakota rechristened as 'Parashuram' will join the 'Vintage Fly' of one each of Tiger Moth and Howard raised at Hindan air force station.  Dakota commenced its journey from the UK on April 17 with a joint crew of IAF and Reflight Airworks. It flew a total of 9,750 km during its ferry en-route halts in France, Italy, Greece, Jordan, Bahrain and Oman, and finally landed on Indian soil at air force station Jamnagar on April 25.It reached its final destination Hindan on April 26.  Air Commodore (retd) Chandrasekhar was given special permission to fly on board the aircraft from Jamnagar to Hindan air force station.