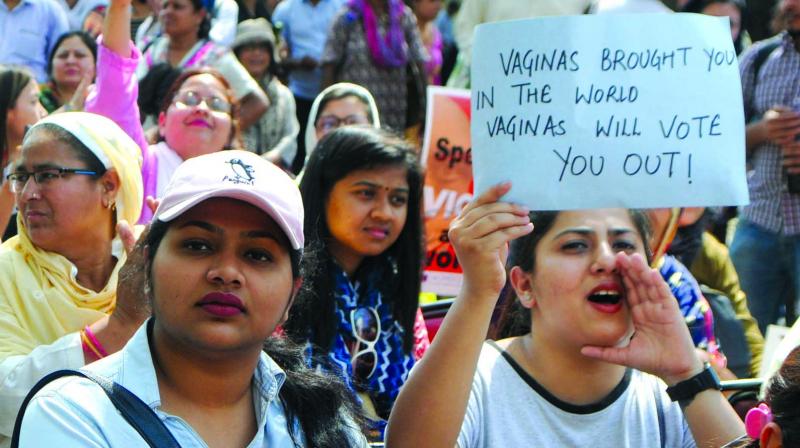 Women from across the country during a “March for Change” in New Delhi on Thursday. (Photo: BIPLAB BANERJEE)

New Delhi: Rights advocates and women of the capital belonging to the civil society and various ground-level movements took to the streets of the capital on Thursday to demand that women’s rights, including work, livelihoods and socio-legal reform, be put on the policymaker’s agenda.

Over 2,000 attended the Delhi edition of the “Women March For Change”. Nationwide, the participation at the 146 venues where the march was organised was between 10,000 and 20,000.

Shabnam Hashmi, rights campaigner and sister of communist playwright Safdar Hashmi said, “Women must come together to renounce the forces that have steered our country towards destruction, religious polarisation, misogyny, casteism and communal politics.” The song, “Aurat utthi nahin to zulm badhta jayega,” written by Safdar, was sung by the walkers.

Though the march was organised keeping the general election in mind, in spirit, it resonated with the recently-concluded Aurat March in Pakistan as well as the 2017 anti-Donald Trump march.

Malathi Mithri, a Tamil poet and feminist publisher, said, “We have gone back 200 years under the Narendra Modi government. It has cut funding for both health and higher education. This march was necessary as a statement against the hate politics played by this government.”

Where does one go from here? Policy analyst and Mahila Kisan Adhikar Manch national facilitator Soma K.P. said, “We see ourselves moving to create awareness on issues that women see as critical to their well-being. We want to engage in a feminist politics within the framework of the constitution.”