An official communication to a boat-owner on Thursday said his boat has been hired to facilitate voters on the polling day on April 11. 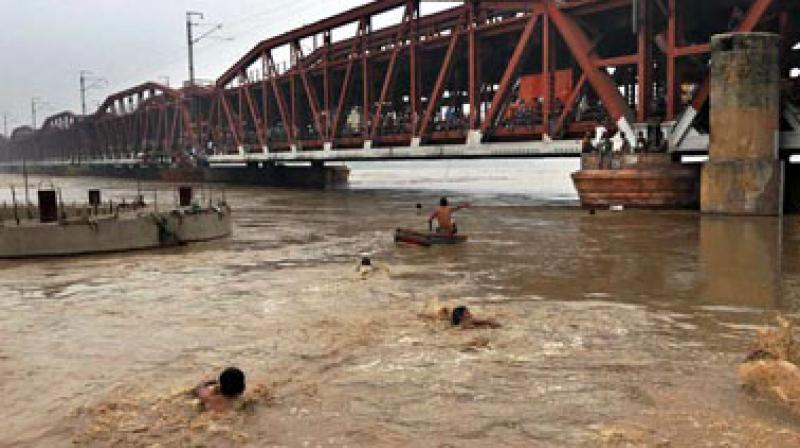 Since there is no bridge, the only way to cross the yamuna river is either on a boat and then walk three kms on a dirt track, or reach by road via Delhi and Faridabad covering 70 km on one side. (Photo: PTI)

New Delhi: The voters of Delepur villagers in Noida will have the privilege to cast their vote in the Gautam Budh Nagar as the administration has hired a motor boat to ferry them across the Yamuna river to help them reach the polling station. Dalelpur is the only village in the Gautam Buddh Nagar constituency, which falls across the Yamuna and towards the Haryana side, but is a part of the LS segment in Uttar Pradesh. The villagers rue years of “ignorance” by the system and lack of connectivity. They had recently announced boycotting the Parliamentary polls. A visit to this village revealed that it lacks proper electricity supply, no drainage and sewer system, among others basic amenities.

Strangely, the village residents claimed they don’t even have essential documents such as Aadhaar card, ration card and driving license. Dalelpur is in the outskirts of the national capital, but a hard place to reach. There is no bridge to link the village to Noida.

The only way is to cross the polluted, stench-emanating river on a boat and then walk three kms on a dirt track, or reach by road via Delhi and Faridabad covering 70 km on one side.

An official communication to a boat-owner on Thursday said his boat has been hired to facilitate voters on the polling day on April 11. The letter to the boat owner said: “Your motor boat has been acquired to ferry the voters from Dalelpur across the Yamuna on the day of polling. The motor boat would ply on April 11 from 6 am to 6 pm so that none of the voters faces any problem to reach the polling station.”