Congestion, lack of tracks force cyclists to go off roads

New road infrastructure has failed to give pedestrians and cyclists the right-of-way: Activists. 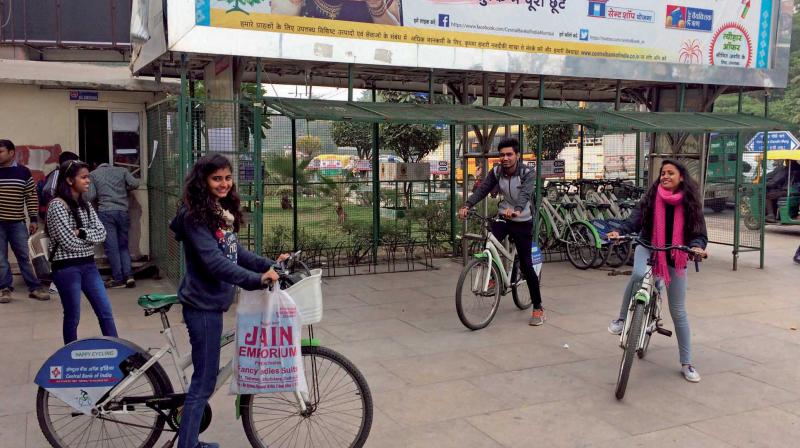 New Delhi: Even though Delhi accounts for highest cycle trips among major cities in the country, not much has changed in the city’s cycling infrastructure.

The dearth of usable cycle tracks, congestion on roads and faulty road designs are some of the challenges cyclists in Delhi face, according to experts.

Since 2010 when cycling tracks were built before the Commonwealth Games (CWG) games, the new road infrastructure has failed to give pedestrians and cyclists the right-of-way, Anumita Roych-owdhury, head of the Centre for Science and Environment’s Clean Air Campaign, said.

Only 14 per cent of car ridership is causing gridlocks on city roads, Ms Roychowdhury said.

As per a 2008 study conducted by Wilbur Smith Associates for the Union ministry of urban development, close to 28 lakh cycling trips are made to Delhi every day, leaving behind other cosmopolitan cities like Mumbai and Kolkata by some margin.

Despite aversion to using cycles as part of active transport, the idea of public bicycle sharing and cycling clubs is slowing catching up with Delhiites. For instance, the bike-sharing scheme at Barakhamba and Vishwavidyalaya metro stations is a hit.

“A year ago, the number of people taking bikes stood at only 50,” the person, who manages the bike-share facility, said.

However, cycling tracks aound the university are not clearly demarcated, with e-rickshaws and cycle rickshaws trotting on either side of the roads, making it difficult for cyclists to ride safely.

Dr Vinay Maitri of school of planning and architecture said the authorities have failed to remove encroachments from cycle tracks around the city.

The urban planner has yielded to cars, Ms Roychowdhury claims. “Which household does not buy cycles for kids? But for them, the use of cycle is only restricted to the housing societies,” she added.