The police have arrested the two owners of the building for alleged negligence in the matter. 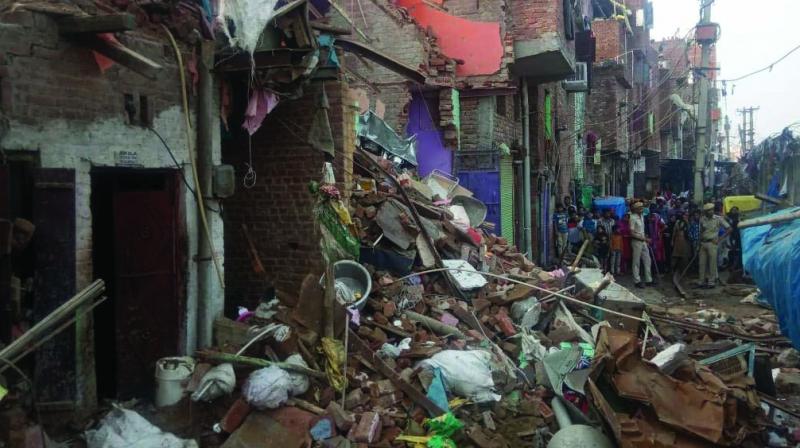 The collapsed building at Seelampur in New Delhi on Tuesday. (Photo: ASIAN AGE)

New Delhi: In a tragic incident, a father-daughter duo was killed and three others were injured after an under-construction building collapsed in Seelampur area, following which two people were arrested, the police said on Tuesday. The building collapsed on Monday night. The police have arrested the two owners of the building for alleged negligence in the matter.

Delhi chief minister Arvind Kejriwal said he will get an inquiry done in the matter. “Six fire tenders were rushed to the spot,” the fire department said. The National Disaster Response Force and District Disaster Management Authority also joined in the rescue operation.

The impact of the collapse destroyed the neighbouring houses. “Police received information regarding the incident at 11:32 pm on Monday. During the rescue operation, five people were taken out of the debris and rushed to hospital where Moni Sarfaraz (21) and her 38-year-old father Mohammad Yaseen, residents of K-Block Seelampur, were declared brought dead,” said Atul Kumar Thakur, DCP (North East). While two of the injured Arman (33) and Sahajan Begam (33) are undergoing treatment at GTB Hospital, another person identified as Samshudin (45,) was discharged after first aid. Two men — Ikramuddin (60) and his son Gufran (32) — have been arrested in connection with alleged negligence in the matter, the police said. Mr Kejriwal said he will ensure strict action is taken against errant officers who allowed the construction of the building.

“It is a very serious matter. There should be a strict action against those officers during whose tenure this building was allowed to construct. I will get the inquiry done into the incident,” he said.