There are speculations of an alleged occult practice. 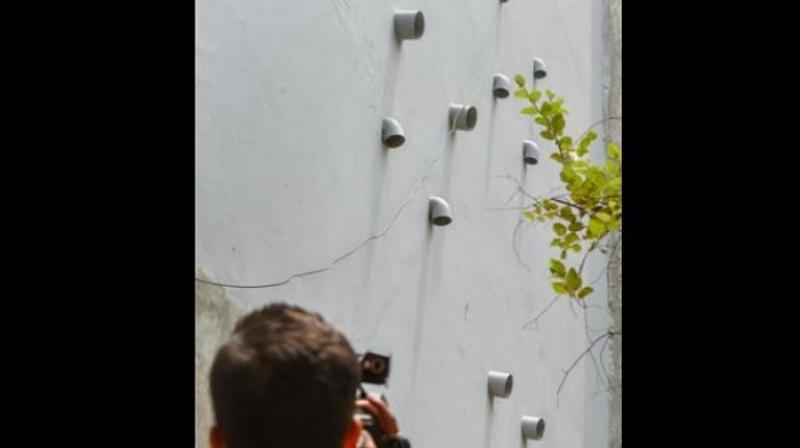 A photographer takes a picture of the 11 pipes protruding out of the house where 11 members of the same allegedly committed suicide, at Burari, in New Delhi. (Photo: PTI)

New Delhi: While the Delhi police is yet to achieve a breakthrough into the alleged murder of a family of 11 in the name of occult practices, astrologers believe that such things happen.

There are speculations of an alleged occult practice. The newest among them is the finding of 11 iron grills on the main gate of the Bhatia house. Police officials have found two registers from the prayer area of the house, which reportedly contained notes on how to attain moksha.

According to the reports, one of the last entries made in the register read, “In your last hours, and during your last needs, the sky will shake and the earth will tremble. Do not panic and recite your hymns and prayers even more, I will come to save you and others.”

A prominent astrologer who wished not to be named said, “Sarvarthsidhi yog (yog for attaining all deeds), which started on June 30 and lasted till the sunrise on July 1, was incidentally falling when this tragic incident happened.”

He added, “The way in which the victims were hanged could be a reference to Banyan tree, which according to the Indian classics is a tree where Buddha attained Nirvana.”

The Banyan tree (vat) is one of the most venerated trees in India. It has the ability to survive and grow for centuries and it is often compared to the shelter given by God to his devotees in Hindu mythology. The tree is said to provide fulfilment of wishes and other material gains.

“This is just an angle according to the Vedic astrology. I am not implying anything or want to interfere in the police probe,” he added.

However, there have been many theories doing the rounds ranging from the hand of an occultist or a ‘godman’ to a case of mass hysteria within the ‘deeply religious’ family.

Nothing is concrete yet and the crime branch is searching for more forensic and circumstantial evidence. The results of the latest search would uncover more murky details.