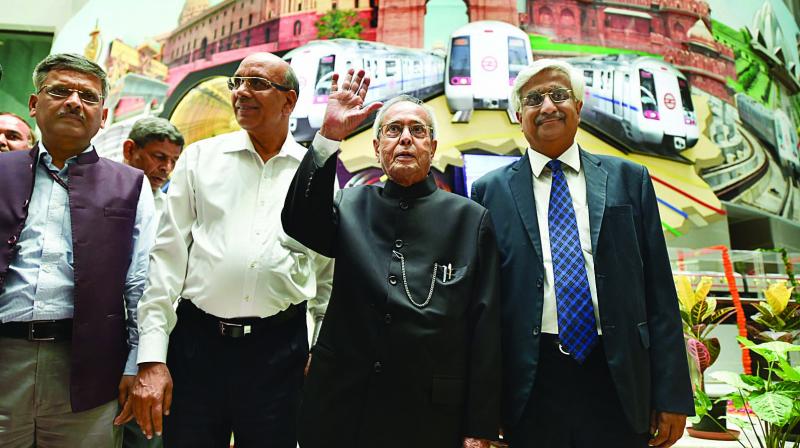 New Delhi: Former President Pranab Mukherjee on Thursday said that teamwork is the root cause of success of the Delhi Metro, and claimed that the Metro is a matter of pride for the people of Delhi. Congratulating the Delhi Metro officers and staff who were awarded for their exemplary performances on the occasion of 24th anniversary of the DMRC, the former President said team work was a unique feature of the organisation.

Teamwork is the root of the success of Delhi Metro, Mr Mukherjee said on the occasion of 24th anniversary of the DMRC on Thursday. He also remembered the contribution of E. Sreedharan on the occasion. “On this occasion, I also recognise the total dedication of E. Sreedharan in building this network. It was so exemplary and managed so ably that many other cities have accepted this model,” Mr Mukherjee said.

Congratulating the Delhi Metro officers and staff who were awarded for their exemplary performances, the former President said team work was a unique feature of the organisation.

“I am happy that DMRC, from the very beginning, has built up this team work, and this team spirit is the root of the success of the Delhi Metro,” he said. Delhi Metro is a matter of pride for people of the city, he stated.

Managing Director of DMRC Mangu Singh said the works on Phase III of the network were complete and its trials were expected to begin from June. “In the balance sections of Phase III, physical works are more or less complete except at Trilokpuri. By the end of June, all sections will be ready for trials,” he said. He termed the previous year as “satisfying and eventful” for the DMRC as new lines totalling 40 kms were thrown open for public.

“The Delhi Metro had opened about 40 kilometres of new lines across three different corridors. Another 35 kilometres of new sections is now ready for operations after clearance by the Commissioner of Delhi Metro Rail Safety,” he said. The event was also attended by Delhi chief secretary Anshu Prakash.