They attacked near his eye with a sharp object. In this attack Anupam has suffered injuries near his eye and on his face. 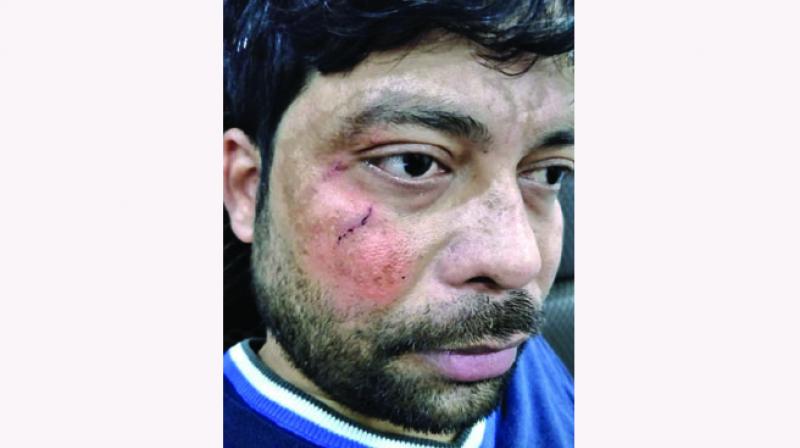 New Delhi: Swaraj Party’s national vice-president and spokesman Anupam was attacked with sharp weapons by unidentified assailants, who even snatched away his mobile phone and fled away from the spot.

The victim has alleged that the entire incident was part of a conspiracy against him.

The incident took place on Friday night around 11 pm in East of Kailash area of southeast district. He was talking on phone when two bike-borne assailants with their faces covered attacked him in a preplanned manner.

They attacked near his eye with a sharp object. In this attack Anupam has suffered injuries near his eye and on his face. The party national president alleged that his eye narrowly escaped the attack as he was wearing glasses.

The entire incident has been reported to the local police. Swaraj India Party president Yogendra Yadav also tweeted on this whole issue and asked the Delhi police for necessary action. After the attack, the police has registered a case of snatching and initiated a probe. Police has detained five persons in this regard.

So far no one has been arrested but we have detained some suspects and are questioning them, said DCP (southeast) Chinmoy Biswal.

Commenting on the issue, Swaraj India founder Yogendra Yadav asked if the Delhi police would take this case seriously, adding that Anupam almost lost his eye in the attack.

Govind Mishra, a member of Yuva Halla Bol — a youth movement for job opportunities and fair selection that is also led by Anupam — tweeted the details of this assault. He wrote to the Delhi police, the Office of the Home Minister of India, the commissioner of police in Delhi and home minister Rajnath Singh, asking them to find the assaulters.