Sealing on, but money collected to develop parking lying unused. 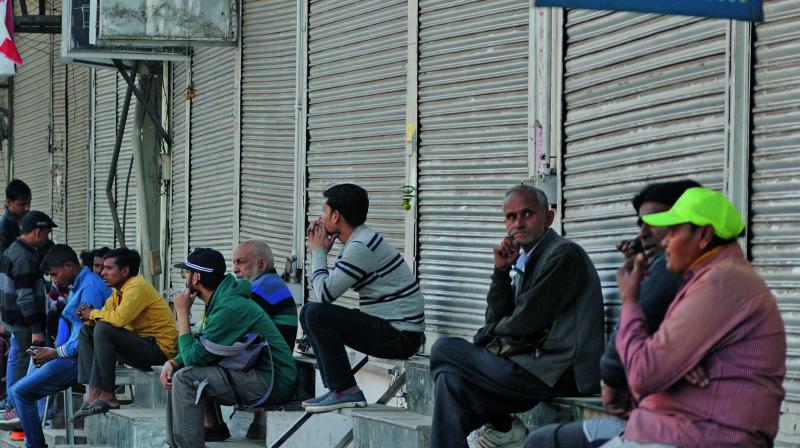 Traders sit outside locked shops during a protest against sealing in New Delhi on Saturday. — Biplab Banerjee

New Delhi:  While the BJP-ruled municipal corporations are sealing commercial establishments for their failure to pay conversion charges as per the direction of Supreme Court-appointed monitoring committee, they failed to utilise several thousand crores to develop parking and other facilities as mandated by the ‘Master Plan’.

As per estimate, all the three municipal corporations collected over Rs 3,000 crore as conversion, parking and registration charges from the owners of commercial establishments on mixed land.

The North Delhi Municipal Corporation (NDMC) has collected Rs 11,80 crore and only spent Rs 130.53 crore on development of parking facilities in its jurisdiction and spent the rest of money in paying salaries to its employees, violating the rules.

As per the rules, money collected as conversion, parking and registration charges from the owners of commercial establishments must be deposited in “escrow account” and used only for providing parking and other civic amenities.

Ironically, the BJP state leadership is trying to cover up the failure of municipal corporations. According to a party insider, it was advised not to speak against the non-utilisation or diversion of funds from ‘escrow account’ in a meeting held in the leadership of BJP vice-president and Delhi in-charge Shyam Jaju a fortnight ago.

“Mr Jaju said that no one should speak about non-utilisation or diversion of funds from ‘escrow account’ as it goes against the party,” the party insider added, who was present in the meeting. Lok Sabha Member from West Delhi Parvesh Verma, Leader of Opposition in Delhi assembly Vijender Gupta and others also participated in the meeting.

The NDMC mayor, Preety Agarwal, told this newspaper that the north corporation has used only Rs 130.53 crore for developing parking facilities while the rest of the amount was used for paying salaries.

Of the total amount of around Rs 300 crore collected as conversion, parking and registration charges, the East Delhi Municipal Corporation (EDMC) has spent Rs 8.38 crore on developing parking facilities and Rs 18.16 crore on salaries.

“Despite facing severe financial crisis, the EDMC has not diverted any large amount from escrow account,  but it has failed to provide civic amenities and parking facilities to these commercial establishments,” said a senior EDMC official.

On sealing drive, traders in the national capital demanded that instead of acting against commercial establishments, the monitoring committee should take action against civic bodies for non-utilisation of funds collected in escrow account. “No new facilities have been provided by the civic bodies despite collecting money under conversion and parking charges. Why action is not taken against the civic bodies for their failure,” said Ravi Prakash Sharma, general secretary, Vikas Marg Vyapar Mandal.