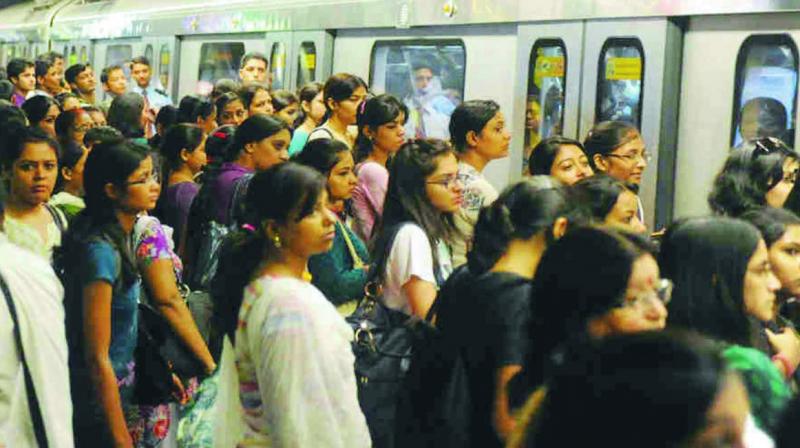 The two branches of the Blue Line connect Dwarka Sector 21 to Noida City Centre and Vaishali.

New Delhi: Delhi metro commuters had a tough time on Tuesday after a technical snag hit the Blue Line (Dwarka Sector 21 to Noida City Centre/Vaishali) service, resulting in trains getting delayed for hours. Passengers were left stranded as services crawled for several hours on the snag-prone corridor due to issues in overhead wiring between Pragati Maidan and Mandi House stations.

The Metro imposed speed restrictions on train operations due to the snag that developed around 11.20 am. By the time it was rectified around 2.45 pm, services were delayed across the over 50-km-long network owing to severe cascading effect.

According to the Delhi Metro Rail Corporation (DMRC) official, “On Line 3, flashing of pantograph was reported from a train approaching Mandi House from Pragati Maidan, which affected OHE wire, due to which a speed restriction of 15 km/hr was imposed from 11.20 am between Pragati Maidan and Mandi House Metro stations (on up-line towards Dwarka) to prevent further damage to OHE. Repair work of the affected OHE portion was carried out in the off peak hours from 2.28 to 2.46 pm, during which train movement was regulated on Line 3. Thereafter, trains started running as per normal on Line 3.”

“It took around one-and-a-half-hours for me to reach Mandi House from Noida City Centre, which usually takes around 30 minutes. At one point, it seemed the train was moving not more than 5 km/hour and even announcements were not made at a regular interval,” a commuter said. Due to speed restrictions, the overall system got majorly affected as trains usually have a frequency of around two minutes on this busy corridor. Overcrowding also spilled on to the platforms prompting many people to end their journeys halfway and take buses, autos or cabs.

It took time for normalcy to be restored even after the rectification of the snag, a Metro official said. “A speed restriction of 15 km/hour was imposed around 11.20 am between Mandi House and Pragati Maidan stations on the up-line towards Dwarka. It was done to address an overhead electrification problem,” the official said. Blue Line services were last affected on Christmas Day when a scheduled maintenance work had thrown operations out of gear for several hours. The two branches of the Blue Line connect Dwarka Sector 21 to Noida City Centre and Vaishali.

Metro authorities say the issues on the corridor like track circuit failure or snags in overhead wiring have much to do with its exposure to nature and as most of it is overground and gets affected by temperature fluctuations.

With around five interchange stations along its length, the Blue Line, Metro’s busiest corridor, carries around 30 per cent of the total passenger volume or around 12 lakh commuters on a daily basis.