Wearing black bands, around 40-50 people took the streets and were seen carrying placards, which read, “we want justice” and “hang the rapists”. 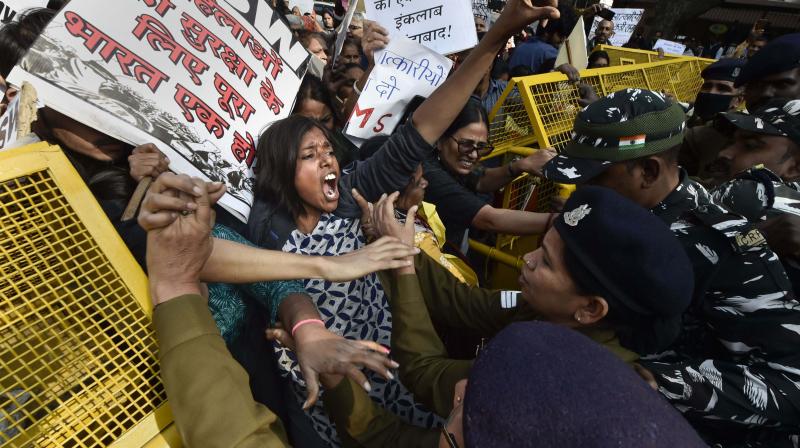 New Delhi: Dozens of people gathered at the Jantar Mantar here on Monday to protest the rape and brutal murder of a Hyderabad veterinarian last week, which shook the country.

Wearing black bands, around 40-50 people took the streets and were seen carrying placards, which read, “we want justice” and “hang the rapists”.

The woman, who worked in a state-run hospital, was raped and killed by the four accused, all lorry workers, on the city outskirts.

Her charred body was found under a culvert in the city’s Shadnagar near on Thursday and the accused arrested a day later.

Amrita Dhawan, the organiser of the protest said, “I am organising this protest not as a politician but as a member of the civil society who is concerned about what is happening in our society. Why did we need another Nirbhaya to talk about how unsafe women are?”

She said that the judicial system has to ensure speedy justice, so that victims’ families get some solace.

“Nirbhaya’s rapists are still in jail and have not been hanged. Those in jail are living their life, getting food and sleep but what about the families of the victims, whose lives are ruined forever,” she said.

Cries of ‘we want justice’, ‘we are ashamed that your killers are alive’ resonated through the air at the protest as people holding placards demanded justice for the Hyderabad victim and other women who face such crimes.

Aditi Purohit, a student of Delhi University’s Hansraj College, broke down while shouting the slogans.

“This is my first time in a protest. I am here because just like a woman who stays in Delhi away from home, the issue affects me and my family.”

The grandfather of Delhi gang rape-murder victim Nirbhaya Monday said those guilty of such crimes should be “handed over” to the people to do “justice”.

In an apparent reaction to the recent rape and murder of a Hyderabad women on her way home from work, he suggested that such cases will come down if those arrested are shot dead in the street. His remarks come on a day when some parliamentarians expressed similar sentiments.

Barring a juvenile, those involved in the 2012 Nirbhaya rape and murder case were sentenced to death but the execution is yet to take place.