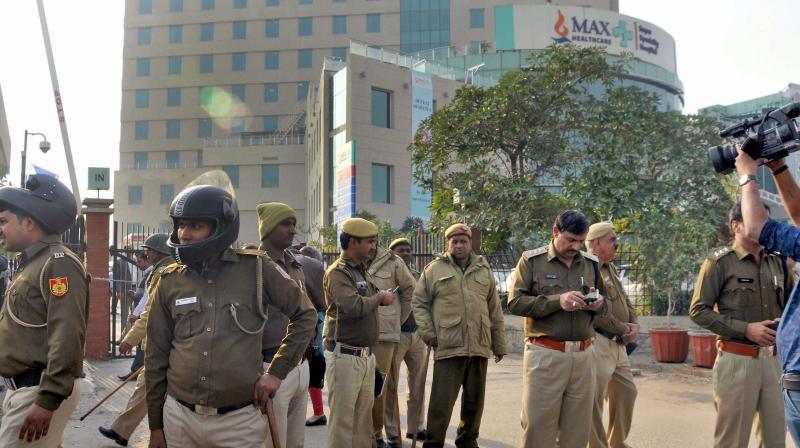 New Delhi: The premature baby, who was declared dead by Max Hospital in Delhi but was later found to be alive by family members, is struggling to survive, doctors said on Saturday.

In a case of alleged medical negligence, one of the newly-born twins was declared dead by the upscale private hospital in Shalimar Bagh. One of the twins was later found to be alive when the parents were on their way to perform the last rites. The baby was then admitted to a nursing home in Pitampura and the doctors said that he is on ventilator. His chances of survival are slim due to the premature birth.

“He is a premature baby of just 22 weeks. He needs a lot of support. Currently, we are maintaining the blood pressure and are giving him antibiotics and nutrients. Initial tests show that he is going to bleed and he has also developed infections. It is difficult for him to survive,” said Dr Sanjeev Gupta, the MD of Aggarwal Hospital at Pitampura.

Dr Gupta also added that in cases of a premature birth, while sometimes it can get difficult to see signs of life, the heartbeat should be tested before declaring a baby dead.

Meanwhile, health minister Satyendar Jain has said that the license of Max Hospital can be cancelled if found guilty of negligence during inquiry by the Delhi government. He also said that the same hospital was issued a show-cause notice on November 22 for not fulfilling some norms related to providing services to patients of EWS (economically weaker section) category. The government had on Friday ordered an inquiry into the “criminal negligence” of Max Hospital in Shalimar Bagh after it surfaced that its doctors had declared the baby dead even when he was found to be alive later.

The mother, identified as Varsha, gave birth to premature twins (a boy and a girl) on Thursday evening. While the girl was stillborn, the baby boy was declared dead later. The hospital wrapped the two bodies in two separate paper bags and handed them over to the family in a polythene bag. On Friday, the family members of the baby alleged that doctors have told them that the baby has developed severe infection after the incident at the Max Hospital.

An FIR was registered against the hospital on Friday based on a complaint by the parents. The hospital, in a statement, has said that it is “shaken and concerned at this rare incident” and it too has initiated an enquiry.