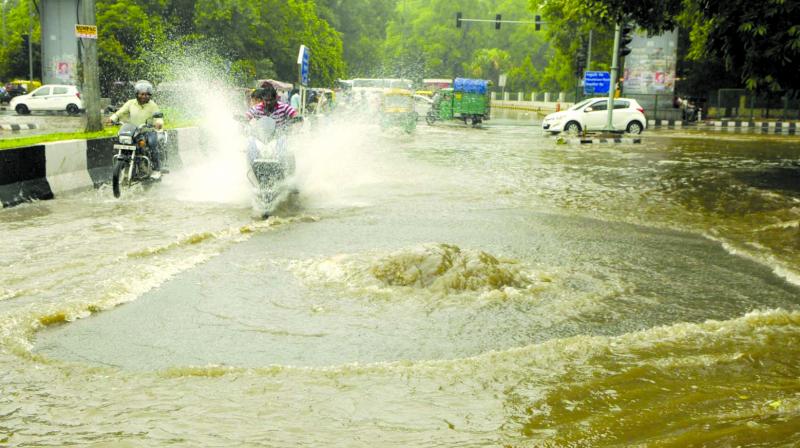 A biker try to negotiate on a waterlogged road near R.K. Ashram Metro Station after heavy rain in New Delhi on Sunday. (Photo: Pritam Bandyopadhyay)

New Delhi: Heavy rains continued to lash national capital on Sunday, as Delhiites woke up to another morning of heavy rain, bringing relief to residents of the city from the humid conditi-ons. However, with some busy roads flooded, traffic was hit in some parts of the city.

The Safdarjung observatory recorded 24.6 mm rainfall in the last 24 hours, with humidity lev-el recorded to be 95 per cent at 8.30 am.

While waterlogging was reported from parts of Delhi, slowing down traffic at many key roads, the downpour on the second day brought respite to residents after days of hum-idity.

According to traffic police, streets were waterlogged near railway brid-ge on Bhairon Marg, Han-uman Setu on Ring Road, DM office, and Nala Road in Geeta Colony.

Among the other areas affected were the Modi Mill area, South Avenue, Lajpat Nagar market, Kela Ghat and Kashmiri Gate. The Delhi traffic police had issued multiple traffic alerts for commuters and posted visuals of waterlogged roads on its official Twitter handle.

Ruling government AAP and BJP in municipal corporation of Delhi seems to be fighting with each oth-er just for there sake. Both the governments have failed to come out with the permanent solution of water logging in Delhi, Maken added. Delhiiites have to face long traffic jams, which result in wa-sting of fuel and money, he added.

“For the next two days, rain and thunderstorm will continue in Delhi. In Haryana, Chandigarh and Delhi there is warning of heavy rainfall in isolated pockets for three days,” K. Sathi Devi of the India Meteorological Departm-ent.

Heavy rainfall on Satur-day also caused power outage in several parts of Delhi. About 30 passengers travelling in a city bus were stranded on Saturday when the bus broke down in the middle of a waterlogged road near Hanuman Mandir in Yamuna Bazaar area.