They continued their strike on Friday after the passage of the NMC Bill in the Rajya Sabha on Thursday evening. 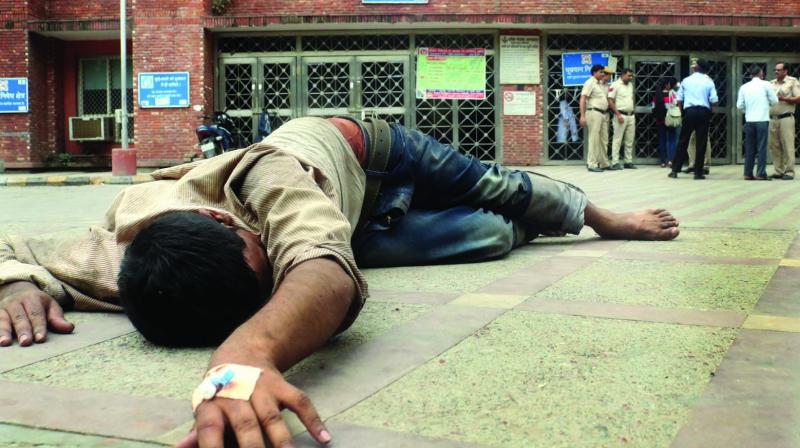 New Delhi: Scores of patients at several government hospitals in the national capital continued to face hardships on Friday as resident doctors went on with their strike and withdrew all services in protest against the National Medical Commission (NMC) Bill, even as Union health minister Dr Harsh Vardhan appealed to them to resume work.

Several associations of doctors have been expressing reservations over certain provisions of the bill and alleged that these were “anti-poor, anti-student, and undemocratic.”

They continued their strike on Friday after the passage of the NMC Bill in the Rajya Sabha on Thursday evening.

Dr Vardhan, meanwhile, appealed to the striking doctors to resume work, saying the bill was in the interest of doctors and patients. The Union health minister made the appeal during a meeting with a delegation of resident doctors from AIIMS and various other associations.

The FORDA general secretary, Dr Sunil Arora, pointed out that the meeting was not satisfactory, at least from the association’s perspective.

“We demand that our concerns regarding the role of community health providers (CHP) vis-a-vis trained doctors and the NEXT (National Exit Examination) be addressed. Once it goes to the President for assent, we would urge him to send it back to the Lok Sabha for effecting the amendments our fraternity is seeking. Patient care should not be given in the hands of quacks; so we are worried,” said Dr Arora.

Asked if the strike would be prolonged, Dr Arora said a call would be taken after a meeting of the protesting doctors. Hospitals in Delhi have put in place contingency plans as regular services were severely affected.

The emergency departments and ICUs at many hospitals were managed with the help of faculty members and faculty members of other medical or surgical departments. While OPDs, radio-diagnosis, and laboratory diagnosis services functioned on a restricted basis in some health facilities, these were shut at many other places.