Victims showed no signs of struggle

Autopsies of 11 bodies completed, 8 died due to asphyxiation 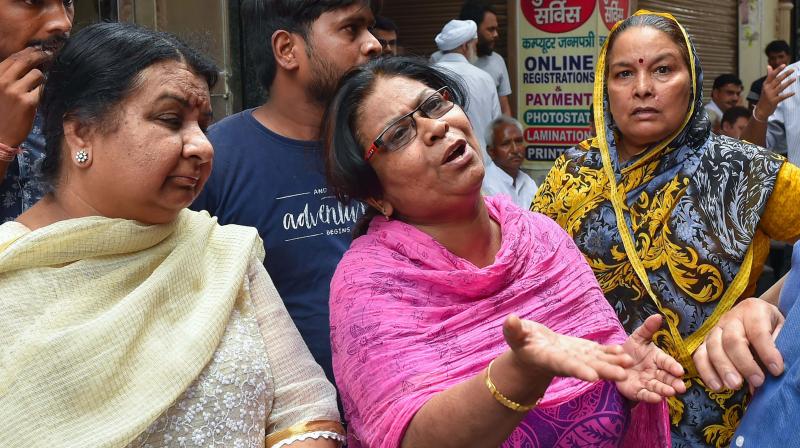 A family member of the 75-year old woman who was among the 11 members of a family found dead at a house in Burari mourns the death of her family members outside their house on Monday. (Photo: PTI)

New Delhi: The post-mortem report of 11 family members, completed in 12 hours, revealed that eight members died due to asphyxiation. There were no signs of struggle or any ante-mortem injuries were found on the bodies. The report just revealed ligature marks on them. The report of the rest of the members would be out soon.

The 75-year-old woman also committed suicide. She ended life with the help of a belt. The belt has been recovered by the police officers. Though it was earlier suspected that Narayan died due to strangulation, doctors said she had died due to “partial hanging”, a police officer asserted.

He added that a rope was found hanging near her body and it is being probed who took it off her neck.

“From the initial examination, it seems that they all died due to ante-mortem hanging. The final report is awaited,” the officer said

The sub-divisional magistrate (SDM) of Civil Lines, BK Jha, has submitted his report to the crime branch. The report by the SDM suggests the family was engaged in occult practice. The family used to perform the rituals while consulting books. They had also met a few occult practitioners, but no name has been mentioned.

“We have found handwritten notes detailing how hands and legs are to be tied. The bodies of 10 persons were found in the manner described in the notes. We are studying them,” said joint commissioner of police (crime) Alok Kumar. A senior police official of the crime branch said on Sunday that they had recovered handwritten notes, saying “the human body is temporary and one can overcome fear by covering their eyes and mouth”.

The notes say if a group of 11 people follow these rituals, all problems would ease out and they would attain salvation. Some notes have dates on which they were written. All the notes talk about reaching the end and gaining peace,” one of the investigators said.

Police sources said, “Probe has revealed that three of the family members had first decided to commit suicide. They bought sedatives and mixed it in the dinner the previous night and served it to the family.”

A police officer said they are probing to find out “if the family indulged in occult practices” or they followed “any godman”.

The three tied the hands of the others so that no one could raise the alarm or get away. Police suspect they first hanged everyone else according to the instructions of a tantrik and later killed themselves.

The trio also tried to write a suicide note, police said that they have found some handwritten notes, which show the influence of some spiritual practices. However, the three cancelled the plan to write a note.

The police has also found the family’s pet dog that was left on the roof and the investigators are now trying to find out the fingerprint traces from its leash. The investigators said, “The man who took the dog from ground floor to the terrace must have left fingerprints on its leash. We will be able to find out who was one of the three culprits.”

The dinner of the victims was laced with sedatives following which they fell unconscious. The person who planned the murders then hanged the family members one by one during which one woman woke up. Her throat was slit to stop her from alerting the neighbours or even escaping.

The post-mortem was conducted at Maulana Azad Medical Hospital.