The last entry in the diary is just two days old. Also, the notes appear to be extracts from some kind of tantrik literature. 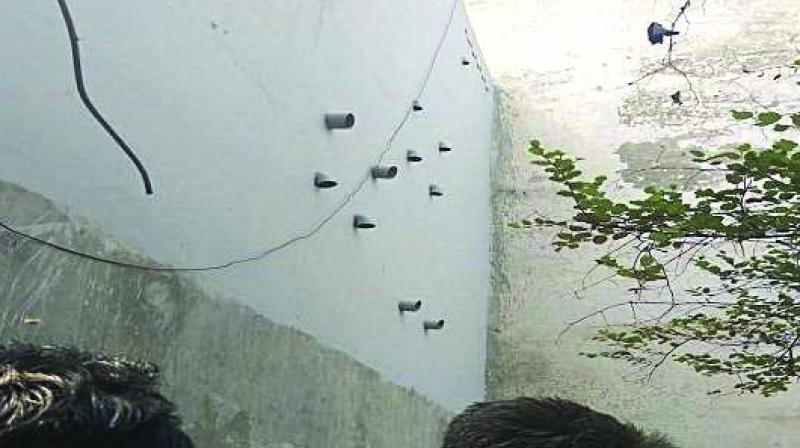 The 11 pipes protruding out of the house in Burari.

New Delhi: After the ghastly incident on Sunday, chilling details have come up during the investigation into the death of 11 members of a family in north Delhi’s Burari. In a major revelation, investigators have come across 11 pipes protruding from one wall of the house, all placed close together.

The police is investigating the purpose of these 11 pipes: whether they were used for occult practices or drainage. Two diaries have been found with what appear to be instructions on death and salvation. The details match with the way the bodies were found — faces wrapped up almost entirely, mouths taped and hands tied behind the back.

But if one looks carefully in the image, seven pipes are of the same size and four are of another which can be decoded as 7 (women) + 4 (men) = 11 committed suicide.

Nitin, one of the friends of the Bhatia family, said that the pipes seem to have a connection with the deaths, as the way they are hanging out of the wall towards someone else’s flat is quite unusual. The police said that the notes contain details of a “Badh puja” ritual, which means, “everybody should hang like the branches of a banyan tree”. Everybody should be on board, it was asserted in the jottings.

The notes said no one could use the phone, so the six phones were left on a silent mode.

According to the police, the “instructions” included choosing a Thursday or Sunday, “following rituals strictly” and perform a havan or ritual. “The more dedication, the better the result,” said the notes. It has been reported that the family had been writing these notes for a few months. The last entry in the diary is just two days old. Also, the notes appear to be extracts from some kind of tantrik literature.

According to the sources, the Delhi police is likely to launch a manhunt for tantrik ‘Baba Janegadi’ in connection with the Burari death mystery. Police got to know about him after they received the SDM reports, which had statements of relatives and friends of the family.

Liquid chemical was found in the stomachs of five deceased. According to the forensic report, the two teenagers — Dhruv and Shivam — were killed first, after which the women followed. The 75-rear-old Narayan Devi was the last one to die.

However, the relatives of the deceased denied such claims. They said that the police are trying to cover up poor law and order situation in the area.

“I can’t believe that they committed suicide. Everyone was so happy. Someone has killed my family and the police have to find them,” said Sujata Nagpal.

Ketan Nagpal, whose maternal grandmother was one of the deceased, alleged that they were killed and dismissed the police theory that it could be a case of “suicide pact”. He said it was a prosperous family.