Warns of action against college for defying Centre’s direction 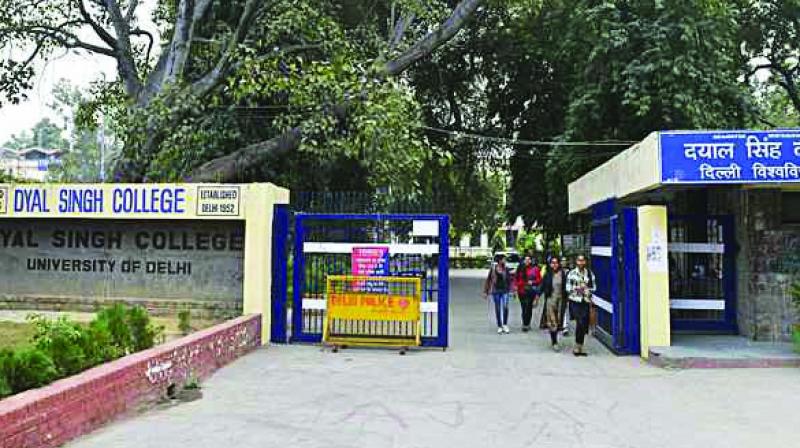 A controversy erupted with various sections vehemently opposing the move to rename the college.

New Delhi: Union minister Prakash Javadekar on Wednesday said that the HRD ministry will not allow Dyal Singh (Evening) College to be renamed as Dyal Singh Vande Mataram College and will take action against its management for doing so without consent.

However, Delhi University, in a statement on Wednesday evening, clarified that no such decision has been taken and that it has not changed the name of Dyal Singh (Evening) College.

The original name cannot be changed, the HRD minister said after reports that the management had renamed the college and banners of “Vande Mataram Dyal Singh College” had been put up.

The ministry, Mr Javadekar said, will take action against the college management committee for going ahead with the renaming despite his statement in Parliament that it cannot be done.

She said she had briefed the Prime Minister and “requested” that the college’s governing body chairman Amitabh Sinha be sacked and action taken against Delhi University vice-chancellor Yogesh Tyagi for hurting the sentiments of the Sikh community.

“Have requested PM @narendramodiji to sack Dayal Singh College mgmt head Amitabh Sinha for going against HRD min. Assurance that name of Dayal Singh College won’t be changed. I briefed him that Sinha’s mischievous conduct had hurt Sikh sentiments & am hopeful of corrective action,” she tweeted.

“Briefed PM that Amitabh Sinha held annual function on April 25 & changed name of Dayal Singh College to Vande Matram DSC. I stressed college mgmt seems bent upon destroying legacy of S Dayal Singh Majithia & is being supported by DU V-C Yogesh Tyagi who should also be proceeded against,” she said in another tweet.

The evening college, founded in 1958, has long shared its campus in central Delhi’s Lodhi area with Dyal Singh College, which was founded the next year. Both institutes share the same governing body and college buildings but have separate teaching and administrative staff.

Mr Javadekar said, “We had earlier also asked them to reconsider the move. We will not allow the college to be renamed. If there are two Dyal Singh colleges, they can call them A and B or 1 and 2 to differentiate but the original name cannot be changed,” he told reporters.

On November 17, 2017, the governing body of Dyal Singh College decided that Dyal Singh (Evening) College would be called ‘Vande Mataram Mahavidyalaya’ after it is converted to a morning college.

A controversy erupted with various sections vehemently opposing the move to rename the college. The HRD Ministry had then asked the college management to put the decision on hold.