The Delhi police and rapid action force (RAF) in Shiv Vihar had given brief permission to people to check out their houses. 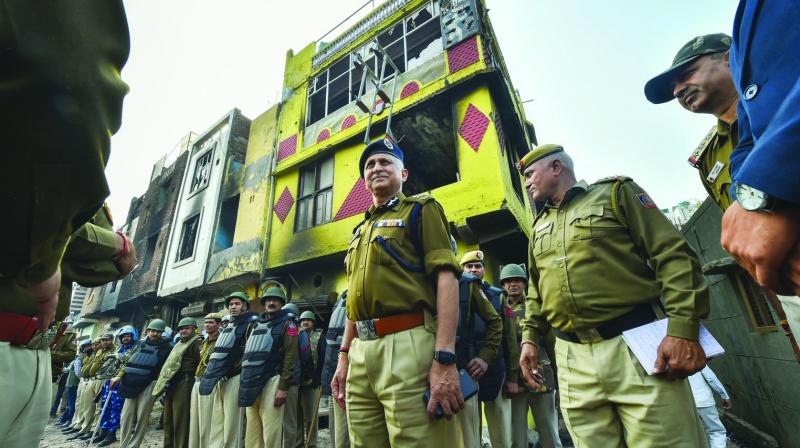 New Delhi: “Log toot jaate hain ek ghar banane mein, tum taras nahin khate bastiyan jalane mein.” (People get sold in making one house, you don’t have mercy while burning colonies). The famous lines of Urdu poet Bashir Badr must have crossed the mind of Najma as she broke down at the first sight of her house in Shiv Vihar. What was once her small world with all essentials of life under one roof, stands covered in dust and ash.

Almost one week after they fled to escape violence, people on Monday made an attempt to take a peek in their houses that now stand completely destroyed. In Shiv Vihar, the epicentre of violence, men and women cried bitterly as they saw their things looted, houses burnt and nothing to retrieve from a pile of ashes and rubble.

“They have taken away my jewellery, my gas cylinder, my utensils and burnt the entire furniture,” Najma cried bitterly. Her 8-year-old son had another reason to mourn loss — his tricycle was lying burnt in the bylane. Najma and her husband Asif, a government employee, had struggled for years to arrange for the basics of life. They had little, but they were happy. “They could have left my son’s cycle at least,” she sobbed.

The Delhi police and rapid action force (RAF) in Shiv Vihar had given brief permission to people to check out their houses. With the security situation fragile, victims do not have permission to return.

The riot victims of Northeast Delhi are trying to pick up the pieces and come to terms with the losses. Traumatized students are trying to focus on exams. Iram and her friends called this reporter asking for Class 10 books in Hindi medium. The students were preparing for their CBSE Board examination when the violence took them by surprise.

“What has happened is past. We want to focus on the future. I will study hard and become a police officer and ensure justice to all whenever, God forbid, a situation like this happens again,” Iram said.

Iram, her cousins and friends have moved to a relatives house in Mustafabad, from Chaman Park where they had initially taken shelter. Her parents still remain in makeshift camps elsewhere. “We have shifted here to study. Please send us stationary, geometry box and copies to write,” said Shaira. Books and stationary were delivered promptly. Women and girls are the worst affected. They do not have basics like undergarments and sanitary napkins as everyone fled in the clothes they were in.

Traumatised people have no faith in police and administration. As they shift to bigger camps, set up by their own community, most of the night shelters notified as “relief camps” by the Delhi government were seen empty. The displaced families have preferred to stay either with relatives, or at places of worship for safety reasons. Both Hindu and Muslims had initially taken shelter in homes opened by sympathetic people in closeby localities.

In Bhajanpura, some 50 Muslim families were huddled in an under-construction building in Aulia Gali. Their Hindu tenants had thrown them out of the houses and locked the gates to escape being the target of attacks.

Medical camps were desperately needed as the injured people and pregnant women refused to step out of the safety net of their community. Besides, several are scattered in different areas and are not aware of compensation announced by the Delhi government. There is so much sense of fear and panic that in some areas victims refused details to volunteers from civil society to fill compensation form saying this may be used against them for NCR.  Scores of people in violence-hit areas of northeast Delhi have been spending their nights in the dark as power lines damaged during the riots remain unrepaired and dangle precariously outside their houses. Damaged electricity meters are also yet to be repaired and people complain that no help has reached them till now.

Infrastructure of the BSES Yamuna Power Limited, which supplies electricity to northeast Delhi, suffered considerable damage during the violence that left at many dead and over 200 injured, including three workers of the power discom.