There are many factories and the miscreants turned these armatures into deadly weapons. 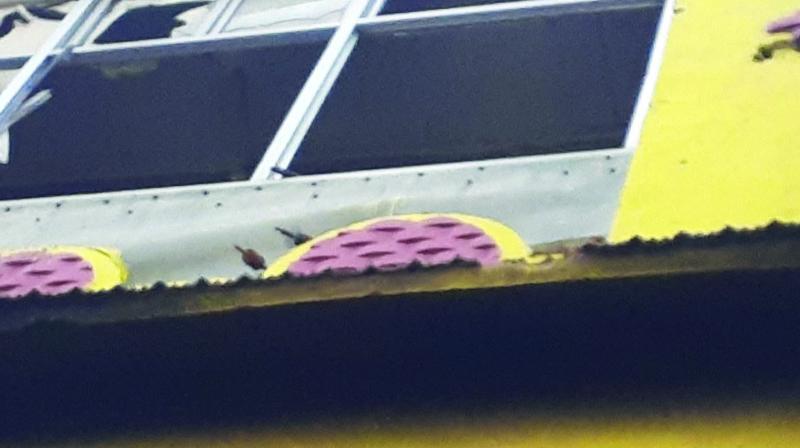 Armatures, the rotating coils of an electric motor, pierced through the building. (Photo: Asian Age)

New Delhi: Rioters keep on evolving their tricks to make day-to-day equipment into lethal weapons to carry out maximum damage to families in the riot hit zone at Shiv Vihar in Northeast Delhi.

Not only catapults, the rioters moved a step further and instead of stones used winding armature (A rotating coil or coils of a dynamo or electric motor) dripped with acid to puncture human bodies. Moreover, to make it more horrific, rioters used small burning LPG cylinders and put them in cars and pushed them toward nearby houses in order to create devastating situations.

A large number of properties have been damaged. Frenzied mobs had torched houses, shops, and vehicles and threw armature and stones at locals and police personnel.

There are many factories and the miscreants turned these armatures into deadly weapons. One can see easily how these splinter marks are still visible on the walls.

“I went to a shop to get milk. The shopkeeper asked me to purchase more ration and milk as if he had some hint that riot could trigger here any time soon. Later that day, our nightmare came true as an armed mob started pelting something towards us. We somehow managed to escape from there,”  said one of the cremation ground priests.

“After few hours, the police came and we returned here only to find that it was not just scattered stones but also armature, which severely injured people compared to stones. These armatures were dipped in petrol and acid with a motive to damage any individual who came under its attack,” he said. Most of the people, including Hindus and Muslims, in the area have fled.

“The rioters used small burning cylinders and put those in a car near my house. They pushed it towards my house that led to a massive fire and my entire house burnt down,” said Gulzar Ahmed, a retired person living in Shiv Vihar area.