Some of the evacuated people have started going back to their homes after the water level came below the danger mark. 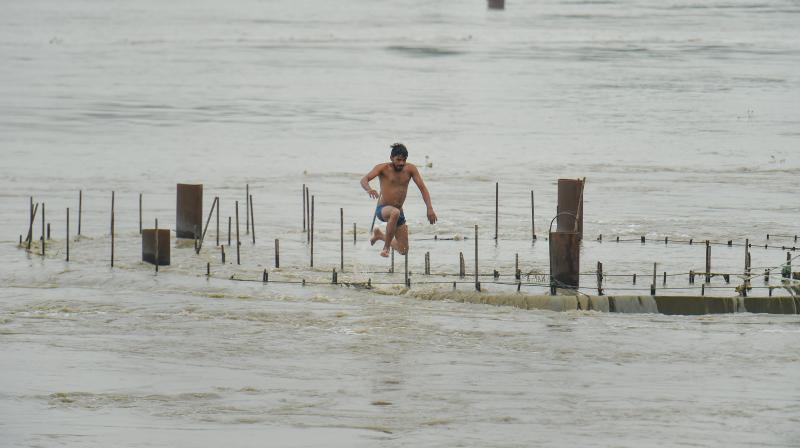 Some of the evacuated people have started going back to their homes after the water level came below the danger mark.(Photo: PTI/Representational Image)

New Delhi: The water level in the Yamuna finally started receding on Wednesday, a day after it rose to its highest danger level in the last five years.

The water level dropped to 204.82 metres on Wednesday around 4 pm, below the danger mark of 204.83, and is expected to recede further and go below the warning level at 204 metres on Thursday morning.

Till 4 pm, 4,000 cusecs of water was released from the Hathni Kund Barrage. “At present, Haryana is releasing 10,000 to 5,000 cusecs of water, which is a small amount and will not affect the levels of the Yamuna River,” said a government official.

As many as 15 people, who were stranded in floodwaters, were rescued from the area on Tuesday. So far, a total of 13,915 people, who were residing in low lying areas, have been moved to safer places due to the rising water levels.

Some of the evacuated people have started going back to their homes after the water level came below the danger mark.

“There were areas where the water did not enter and we had moved people from there as a precautionary measure. Those people have moved back to their homes. However, the other low lying areas where water had entered are still muddy so the people are staying at the camps for the moment and will move back in a day or two,” the official said.

At present, out of 13,915 people, around 7,500 are still at the tents and temporary shelters set up by the government.

The river was flowing at 206.05 metres on Tuesday at 8 pm at Old Yamuna Bridge, which had been closed for vehicular traffic. The water level had reached 205.30 metres at 7 pm on Saturday and had recorded 205.50 on Sunday evening, which is above the danger mark of 204.8 metres, prompting authorities to rescue people from the low-lying areas, even as Delhi CM Arvind Kejriwal held an emergency meeting with top officials of his government.

The overflowing water of the Yamuna River entered some houses in low-lying areas of Burari in North Delhi on Tuesday, officials said.

The people were accommodated in 1,461 tents and temporary shelters, where they are being provided food and medical help.