Six of 11 members of Delhi family died due to hanging: Post-mortem report

The post-mortem report further said that no signs of struggle were found. 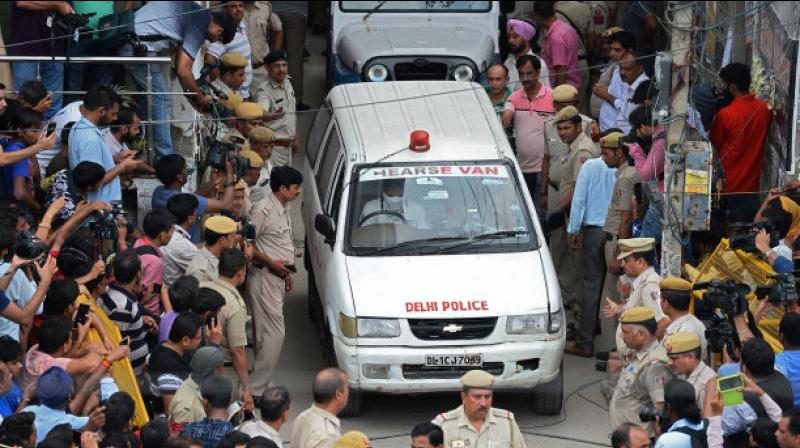 A hearse van drives out carrying bodies of victims drives out near the site where 11 family members were found dead inside their home. (Photo: AFP)

New Delhi: The post-mortem report of six of the 11 members of a family who were found dead at their residence in Delhi revealed that the cause of their death was ligature hanging.

The post-mortem report further said that no signs of struggle were found.

The family members had also donated their eyes.

“First thing we did was to donate their eyes that could provide eyesight to 22 people, considering the family was religious and always wanted to help others. We gave approval letter yesterday,” Navneet Batra, a friend of the family, told ANI.

On Sunday morning, the bodies of 11 members of a family were recovered from their house located in Sant Nagar area of north Delhi's Burari. The bodies were discovered when a neighbour grew suspicious after he found the grocery shop run by the family closed.

The police are yet to ascertain if it was a case of mass suicide or some members were murdered while some committed suicide.

Handwritten notes recovered by the police from the house have indicated towards observance of some definite spiritual or mystical practices by the whole family. According to the police, two registers were found with handwritten notes on how to attain salvation.

The Crime Branch is investigating whose handwriting was there in the diary, why was it written and from where did the information come, news agency ANI reported quoting sources.

The sources further said that the family of the man whom one of the deceased was due to marry will also be questioned. Call data records of the family members and search history on the internet are also being scrutinised.

10 people, including two men, six women and two teenagers, were found hanging from a ceiling on the first floor of the two-storey house on Sunday. They were all blindfolded and gagged and some of them had their hands and feet tied as well. An old woman was found dead in the adjacent room of the house.

Also Read: 11 of family found dead in Delhi; 10 hanging blindfolded, one on ground

Pratibha's daughter, Priyanka (33), who had got engaged last month and was supposed to get married by the end of this year, was also found hanging.