According to the police, two registers were found with handwritten notes on how to attain salvation. 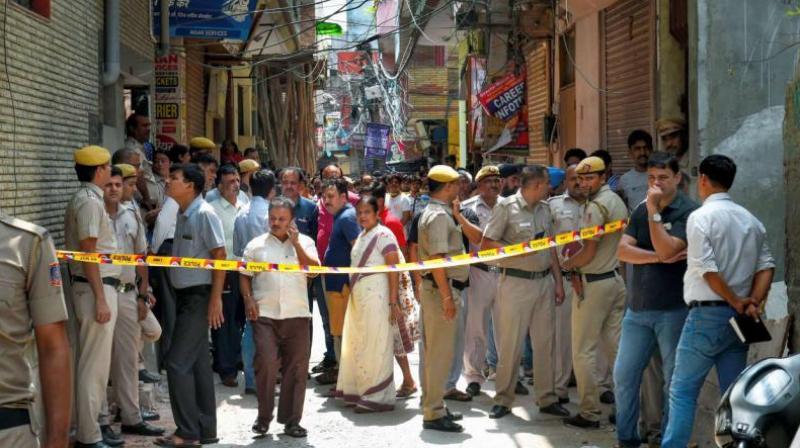 11 members of a family were found dead in a house in north Delhi's Burari on Sunday. (Photo: PTI)

New Delhi: Handwritten notes recovered from the house in north Delhi’s Burari, where 11 members of a family were found dead, indicated towards observance of some definite spiritual or mystical practices by the whole family and provide a motive in the case, police said.

10 people, including two men, six women and two teenagers, were found hanging from an iron-mesh in the ceiling on the first floor of the two-storey house on Sunday. The deceased were blindfolded and gagged and some of them had their hands and feet tied as well. An old woman was found dead in another room of the house located in Sant Nagar area of Delhi.

According to the police, two registers were found with handwritten notes on how to attain salvation.

"We have found handwritten notes detailing how hands and legs are to be tied and are quite similar to the manner in which the bodies of 10 persons were found. They are exhaustive notes and we are studying them," Joint Commissioner of Police (Crime) Alok Kumar was quoted as saying by news agency PTI.

The Crime Branch is investigating whose handwriting was there in the diary, why was it written and from where did the information come, news agency ANIreported quoting sources.

The sources further said that the family of the man whom one of the deceased was due to marry will also be questioned. Call data records of the family members and search history on the internet are also being scrutinised.

One of the notes read, "The human body is temporary and one can overcome fear by covering their eyes and mouth."

Providing a clue into the investigation, "The notes say if a group of 11 people follows these rituals, all problems would ease out and they would attain salvation. Some notes have dates on which they were written while others didn't have it. All the notes talk about reaching the end and gaining peace," PTIreported, quoting one of the officers investigating the case.

A case of murder has been filed on the basis of ligature marks. However, the investigators suspect that the deaths could be a suicide pact.

Also Read: 11 of family found dead in Delhi; 10 hanging blindfolded, one on ground

"It is possible that the elderly woman was strangulated since she was not in a condition to climb the stool. We are probing whether the children were killed or were convinced to take the extreme step," a police official said.

No signs of ransacking or theft were found from the house, and mobile phones and gold jewellery on the bodies of the women were found intact. The crime scene did not indicate any signs of struggle, police said.

An FIR has been registered under Section 302 (murder) of the IPC at Burari police station, and the investigation has been transferred to the Crime Branch, Delhi Police Commissioner Amulya Patnaik told The Indian Express.

“Our senior officers of Crime Branch unit also visited the crime scene, and we are probing the case from all angles,” he said, adding that the FSL team’s report and the autopsy report is awaited.

Neighbours were also shocked and recalled how religious and helpful the family was. They also said they never saw anything suspicious

"They would chant 'Gayatri Mantra' and worship the gods once during the morning and once in the evening. We never saw any 'tantrik' or godman visiting their house. They were helpful and humble," one of the neighbours told PTI.

Meanwhile, Ketan Nagpal, whose maternal grandmother was one of the people found dead, alleged that they were murdered.

"They were not facing any financial issues and had not taken even a single loan. Everything was fine. Why would they kill themselves?" Nagpal said.

Pratibha's daughter, Priyanka (33), who had got engaged last month and was supposed to get married by the end of this year, was also found hanging.

The family stayed at a double-storey home in Sant Nagar area of Burari and ran a grocery shop and plywood business.