Shock in Delhi’s Burari: 11 of one family found dead 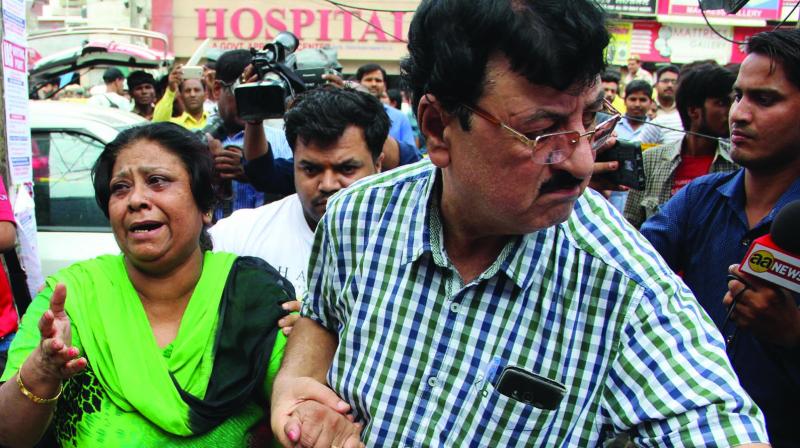 New Delhi: The national capital woke up, on Sunday, to the horrific news of mass murder in Delhi’s Burari area. Eleven members’ of a family were had allegedly committed suicide, throwing the police in a tizzy.

The probe into the alleged suicide case has left the police sleepless as prima facie it appears the family was allegedly involved in mystical practices. The case has been handed over to the crime branch for further investigation.

“On the basis of ligature marks, the police has filed a case of murder. It is suspected a member of the family killed the rest and then committed suicide. The police is investigating the possibility of the deaths being linked to occult practices,” Vinit Kumar, additional deputy commissioner of police (north) said

According to information, a PCR call was received around 7.30 am on Sunday that over 10 bodies were found hanging from an iron grill ceiling. Most of the victims were blindfolded with their hands tied behind their backs, while a 75-year-old woman’s body was found lying on the floor.

During a search of the house, certain handwritten notes were found, which point to the observance of definite “spiritual or mystical practices by the family,” the police said.

Rajesh Khurana, the joint commissioner of police of Central Range who visited the crime spot, confirmed the incident. “Bodies of seven women and four men, including three teenagers have been found. We are investigating from all possible angles, we are not ruling out anything,” he said.

“Prima facie, we suspect they committed suicide. But we are investigating the case with other possible angles of homicide as well. We are also checking the CCTV footage,” another senior police officer said.

The bodies have been sent for post mortem. A board of doctors has been constituted to conduct post mortem on the bodies of the deceased.

The case has been transferred to us (crime branch). We have inspected the site. Hand-written letters that were recovered suggest spiritual angle to the deaths. Probe is on,” Alok Kumar, joint commissioner of (crime) said.

The deceased Bhatia family ran a grocery shop and plywood business at a little distance from their double-storey house in Burari’s Sant Nagar area. The family primarily hails from Rajasthan and has been living in the area for the last two decades.

The neighbours were in a state of shock after learning about the tragedy. Other members of the family alleged the victims have been killed.

One of Narayan Devi’s daughters, Sujata, lives in Panipat with her family.”I can’t believe they committed suicide. Everyone was so happy. Someone has killed my family and the police has to find them,” a sobbing Sujata said.

“It is a tragic incident. I have spoken to the police. Let’s wait for their investigation to be over,” chief minister Arvind Kejriwal, who visited the spot, said.