The Delhi Traffic Police are very actively alerting the commuters through Twitter about the traffic jams due to waterlogging. 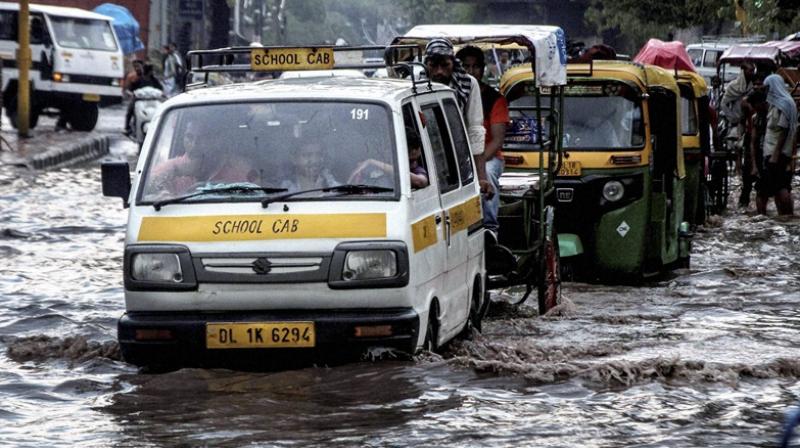 Heavy rains in Delhi create havoc on the roads mostly in the form of water logging. (Photo: Representational/PTI)

New Delhi: Heavy rains in Delhi have brought relief to Delhiites from the rising temperature, but on the flipside, it has also created havoc on the roads mostly in the form of water logging.

On May 25, Public Works Department (PWD) minister Satyendar Jain chaired a meeting of different agencies to take stock of the monsoon preparedness in Delhi, but the current scenario of roads in the city put a question on the work done so far.

The Delhi Traffic Police are very actively alerting the commuters through Twitter about the traffic jams due to waterlogging.

On June 6, Delhi Lieutenant Governor Anil Baijal chaired a high level meeting to discuss the issues of major encroachments and roadblocks in different parts of Delhi as raised in the Delhi High Court.

The minister directed launching of a call centre for receiving complaints of waterlogging from June15 onwards. The helpline toll free number is 1800118595.

The minister directed the helpline number to be made functional on a 24x7 basis.

Various agencies have also been directed to keep their pumps for waterlogging removal ready by June 7. All these agencies assured the minister that they are working to meet the deadline for preparedness.

The PWD informed that a total number of 1447 pumps will be available for use by different agencies.

Jain had earlier directed the PWD, DDA and MCDs to complete the desilting of drains in their respective jurisdictions by June 7.