Shopkeepers in a fix over existing stock as they have already paid tax on it. 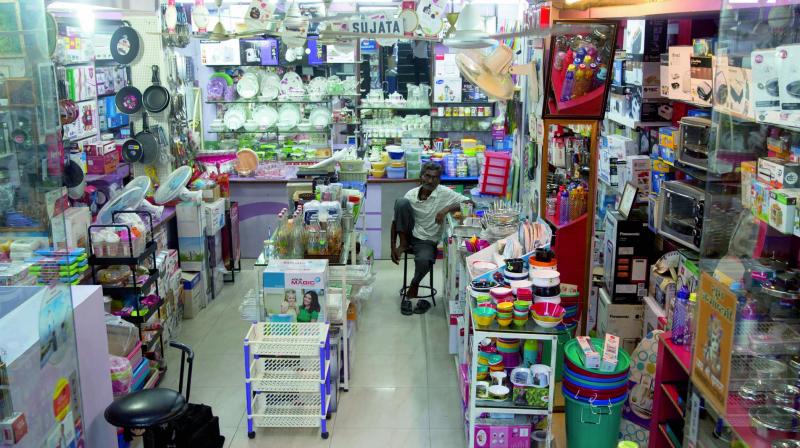 A shopkeeper waits for customers at a store in New Delhi Saturday, after the rollout of GST. (Photo: PTI)

New Delhi: As GST rolled out on Saturday, shopkeepers and traders in the city tread cautiously to avoid any error.

“Then we tried to contact the Railway, but they, too, couldn’t help. Now all the stock is lying here and things are getting delayed,” said Anil Gupta, a shopkeeper in Old Delhi’s Sadar Bazar.

He added that it has been a slow day since the morning as everyone, including the customers, is cautious and trying to grapple with the rules and policies of the new tax regime.

“When we tell a customer that a particular item is taxed at 18 per cent, he/ she takes a moment to decide whether to go ahead with the purchase or not,” he said. Also, many shopkeepers on Saturday wondered what to do with their existing stock as they have already paid tax on it while purchasing it from vendors.

“When we had purchased the stock, we had paid VAT on it. Now when we sell it to the customer, GST will be levied. There is no explanation on how to calculate the difference,” said Sanjiv Mehra, who owns a toyshop in Khan Market.

Mr Mehra, owner of four toy-shops, has already started winding one of his shops as he thinks that the new tax system is very complicated and he will have a harrowing time managing all shops together.

“There is no margin for error. There is a clause for penalty double the tax amount missed by error plus a fine of Rs 10,000 more which is a cause of worry among various traders. They should have done a trial run first. Don’t government officers commit errors; then why such penalty on us?” he asked.

Mr Mehra argued that big service providers have resources to hire accountants while the small ones cannot afford to.

Many traders had earlier complained that the government has failed to address their apprehensions about the complexity of new provisions. They said that there is confusion, especially among the retail businesses, on various rules and they fear that the GST might disrupt their lives.

“I expect my business to go down for a few months before it will pick up again as many clients are not aware of the new rules,” said a trader in Old Delhi’s Chandni Chowk area. “I am not averse to taxation. But at least make it simpler. Some rules of this new system will dilute the government’s promise of ‘ease of doing business’,” he said.