Bumper vegetable, wheat yields push back farm distress in UP

Kallu Ram has halved the use of chemical fertilisers and is supplementing it with vermi-composting. 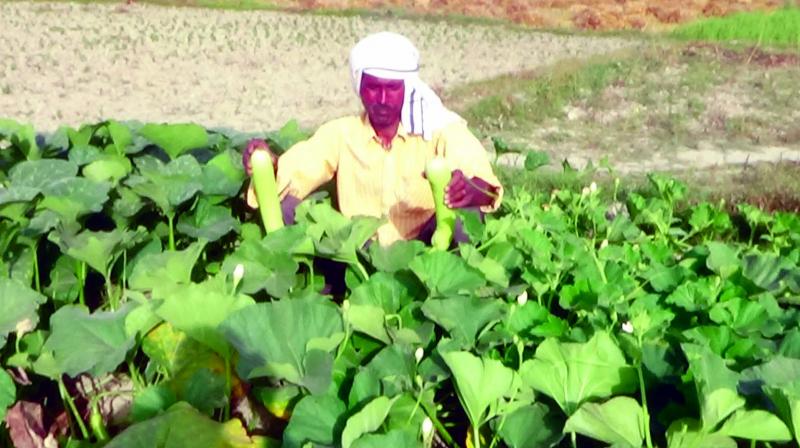 Kallu Ram poses with bottle gourd in his field

At a time when farmers across the country are feeling marginalised, many unable to meet the rising costs of seeds, fertilisers, weighed down by loans they are unable to pay back are committing suicide, Kallu Ram, Ahsan Ali, Ramnivas Sahu, farmers from Chittaura block of Bahraich, Uttar Pradesh, hand held by the Aga Khan Foundation (AKF), are upbeat. Their fields are lush green with vegetables and golden brown with the ripened and harvested wheat.

Under its Uttar Pradesh Area Development Programme, since 2010 the foundation has been working in five blocks of Bahraich and Shravasti districts with half a dozen projects ranging from education, sanitation to women’s empowerment and farming. To enhance food security and household incomes it built on the capacity of farmers with demonstration of improved agricultural practices. Currently it is working with 3,200 farmers who had training and exposure visits to Krishi Vigyan Kendras and successful farmer-oriented NGOs.

There is a shift to vermi-composting, bio-pesticide and bio-fertiliser (amrit pani and amrit khad). Organic farming is transforming the landscape, improving productivity and soil quality. Vegetable cultivation has surged and over 140 acres brought under commercial vegetables.

Kallu Ram, 45 years, a marginal farmer with eight bighas of land at Godiyanpurwa village, Bahraich represents the new breed of better-informed farmers. It was just two years ago that he came in touch with AKF’s field workers and learnt about the rice and wheat intensification methods. “Earlier we just scattered the wheat seeds, now we do line planting keeping a distance of eight inches by eight inches for wheat. Rice transplanted at random is now transplanted in neat rows of 10” by 10”,” says Kallu Ram whose wheat yields increased from two quintal a bigha to five quintal per bigha. In a year he has a profit of Rs 50,000 to Rs 60,000.

Earlier Kallu Ram grew vegetables only for his family’s needs, now he grows them commercially and sells them in the local haats as well as in the mandis of Bahraich. Machan cultivation of vegetables, growing them in two tiers — leafy vegetables at ground level and those that grow on creepers like bitter gourd (karela) and bottle gourd (lauki) on a machan or a raised platform of wooden poles and silken vinyl threads has yielded bumper crops, particularly in the rainy season.

Kallu Ram has halved the use of chemical fertilisers and is supplementing it with vermi-composting. After coming under the wings of the AKF, he has not taken a loan. Earlier, he had taken loans of Rs 10,000 to Rs 20,000 from relatives and returned them, but never from banks or moneylenders. “There has been no suicide in Chittaura block and I don’t envisage that happening in the future,” he says with confidence.

Santosh Mishra of AKF, who is working with 450 farmers on vegetable cultivation, says as against five per cent of farmers growing vegetables earlier, now 15 to 20 per cent do so. Farmers cultivating bitter gourd have made a net profit of Rs 60,000 a year. Farmers into vermi-composting are saving money on fertilisers and improving soil quality. Farmers meet twice a month to discuss and share information on new technologies in agriculture and understand market demands. Kallu Ram’s three children go to school but help him with de-weeding. He would like his son to continue farming while working on a job that his education entitles him to.

Ahsan Ali, 50 and director of the Food Producers Organisation, has 20 bighas and grows wheat, maize and a variety of vegetables. The net profit from vegetables alone is Rs 50,000 a season and there are two seasons of summer and winter vegetables.

Ramniwas Sahu of an adjoining village represents the new generation which wants to combine a job with farming. With a diploma in TV and radio repair, he does this work in evenings after a full day working on his seven bighas. His attitude and approach to farming changed dramatically from 2014 when Rajesh Yadav of AKF’s livelihood programme gave him 100 grams of bitter gourd seeds. He planted it between the rows of potatoes and it was like “magic”, he says. His first crop of bitter gourd fetched him Rs 22,000 at Rs 355 a quintal and ever since his focus is on vegetable cultivation. He too has a five feet tall machan, but it is made of angle iron and not wood which has to be replaced every year. He and his brother invested Rs 1.25 lakhs on the new machan, confident of recovering the money. “I will grow karela nine months a year and my profit will be Rs 70,000 to Rs 80,000 a year, which is more than the profit from wheat.”

The yields, whether it is brinjal, tomatoes or bottle gourd are increasing every year. Hegrows allhis family needs, even coriander, chillies and turmeric, and buys only salt from the market. The biomass manure he uses enriches the soil for five years.

Ramniwas sells directly at the mandis and because his produce is good, it goes quickly. This year he plans to grow hybrid papaya on the periphery of his fields and is ensuring that both vegetables and fruits are irrigated through a common water channel. Inspiring him and several other farmers for papaya cultivation has been Pehelwan of Alurvantapura village whose one tree yielded a bumper 80 kg of papaya.

Ramchander, with 20 bighas is a small farmer, but his profits are growing. The good yields from farms are reflected in improved health and living standards of the village, he says. Children go to school, have greater aspiration. Silen Kumar, a nephew of Ramniwas, is doing his graduation and hopes to become a lawyer. The villages are clean, marked by the absence of plastics, seen in urban areas. Toilets have come up and more villagers are using them though many still use them to store grains.

But it is 50-plus Shetal Prasad of Kulsipur village, gram panchayat Raipur, who presents the dramatic change possible in a farmer’s life if he receives the necessary support. With seven children to feed and clothe he had mortgaged his farmland and was plying a rickshaw. The only buffalo of the family was stolen around the same time and he went into depression. With AKF’s innovative approach to livelihoods, he has been able to return to full-time farming. His first crop of karela earned him Rs 50,000 and he was able to pay off the mortgage and reclaim his land. Now he grows a variety of vegetables and sells them on a cart. He is also rebuilding his house and life is looking up.

Improved agricultural practices are supported by a cadre of trained village resource persons and structures like the Farmers Producer Organisation (FPO) and farmer’s clubs. Dhaniram of Gulra village is chairman of the FPO and Sunil Kumar, its CEO. They procure quality seeds and fertilisers from IFFCO and sell it to farmers at rates cheaper than the market. Sunil Kumar says 250 farmers are registered members of the FPO after paying registration fee of Rs 200 and 111 are shareholders. The shift to organic farming and commercial growth of organic vegetable is steered by the FPO; the target is 1,000 organic farmers by the end of the year. The FPO is also determined to set up its own mandi and is trying for a license to do. Discussions have begun on mushroom farming this winter and an external technical agency is developing a three-year business plan for the FPO.