The incident took place a few days ago near Patel Nagar Metro station. 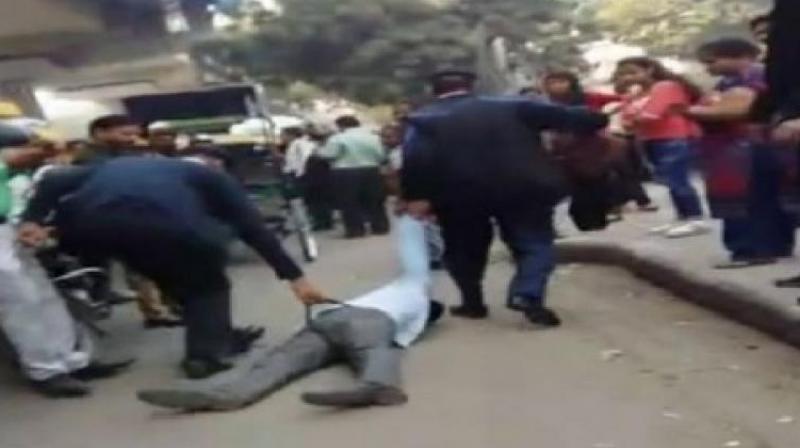 The viral video shows the police dragging him on the road and landing blows on him. His wife can be seen screaming, asking for mercy. (Photo: ANI)

New Delhi: In a horrific incident, personnel of the Delhi traffic police caught hold of a biker who was riding without a helmet and dragged and thrashed him in full public view. The video of the assault has gone viral.

The incident took place a few days ago near Patel Nagar Metro station.

The said officials were on traffic duty when they spotted a man riding a bike without a helmet. His wife was riding pillion. When the police asked him to stop the bike and pay fine, he tried to dodge the cops. The police personnel became angry, chased the biker and caught hold of him.

The viral video shows the police dragging him on the road and landing blows on him. His wife can be seen screaming, asking for mercy.

The Delhi police has put out a statement, saying that the biker was at fault as he violated the traffic rules. The statement also claimed that the biker slapped a traffic police constable.

“The police stopped them for a challan. Instead of paying the fine, the biker slapped a constable. He was then chased. We didn’t assault him. Seeing passersby were making a video, he feigned unconsciousness and fell on the ground,” the statement by the police stated.

Delhi police chief spokesperson Deependra Pathak said that the rider violated the norm and hence was asked to wait. He said that the biker misbehaved with the traffic cops and even manhandled them.