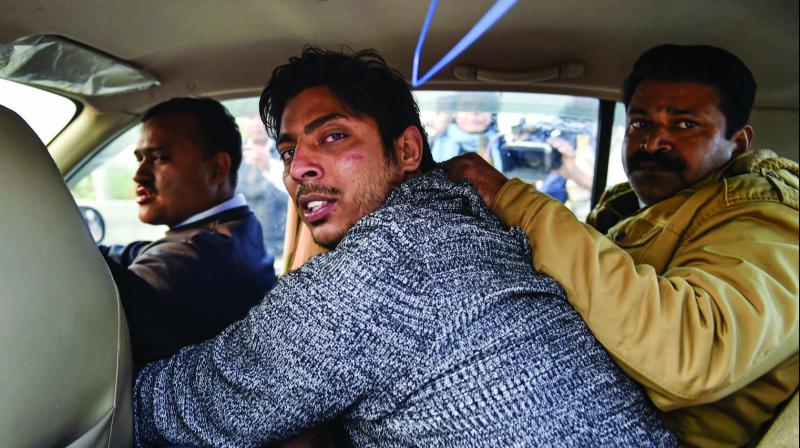 Police take away an unidentified person after he opened fire at Shaheen Bagh in New Delhi on Saturday. (Photo: PTI)

NEW DELHI: A gun-wielding man fired two aerial shots from a country-made pistol near the police barricades in Shaheen Bagh area, which resulted in chaos and panic among the protesters. He was nabbed by the protesters on the spot and handed over to police.

Even when the man was in the grip of police, he was heard chanting “Jai Shri Ram” and was also shouting “Hamare desh mein kisi ki nahi chalegi, sirf Hinduon ki chalegi.

The incident occurred around 4:45 pm on Saturday. Two days back, a teenager fired from a pistol at anti-Citizenship Amendment Act (CAA) protesters at Jamia Millia Islamia, injuring a student.

According to sources, “couple of days ago Baisla got stuck in traffic jam while going to his sister’s wedding in Lajpat Nagar from Noida. He felt agitated which made him very upset and angry. He was claiming that he took this initiative due to that inconvenience. However, police said that they are verifying his identity.

“The accused fired in air near police barricades. He was overpowered by police personnel and taken into custody. A case has been registered under relevant sections,” said DCP (Southeast) Chinmoy Biswal.

Another woman protester said that those who are against their protest are trying to scare them but the protesters will not step back. “The outsiders are trying to derail this movement but we will not let this happen,” she said.