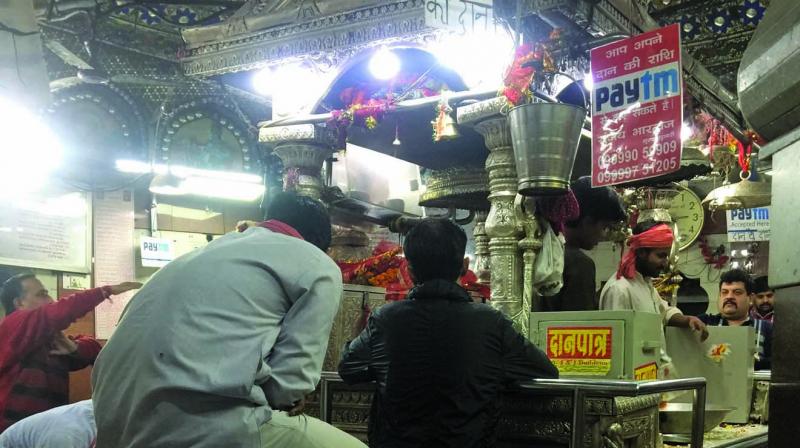 Most of the temple’s representatives in the city say that donations made to the temples and dargahs have slouched by 40 per cent.

New Delhi: It seems not only the general public who has been adversely affected post demonetisation, the move has even left ‘God’ cash strapped. Most of the temple’s representatives in the city say that donations made to the temples and dargahs have slouched by 40 per cent. While temple trustees asserts that they are not issuing receipts for donations anymore in a bid to avoid accepting old currency notes, South Delhi’s Kalkaji Temple is using Paytm to accept donations.

The devotees, instead of lining up at temples, are seen queuing up outside ATMs. “There has been a slump in the donations since the government’s announcement of currency ban. There also has been a marginal decline in the devotees visiting temples, which has inversely affected the donations too. However, the actual picture will be clear after one month. As of now, we have instructed our sevaks not to issue receipts for donations or ‘daan peti’,” said a member of Jhandewalan Temple.

Small flower vendors, sweet shops and provision stalls, which offer puja items, have gone out of business. Mohan Lal, a sweet shop owner at Jhandewalan temple, has already incurred a loss of over Rs 50,000 as the sweets and other prasad is rotting in the shop. “No one is coming forward. The move by the Central government has created havoc in our lives. With no cash in flow and dropped sales, it has become a problem for me to pay my children’ s school fees,” added Mohan Lal.

A spokesperson from Isckon temple said, “The management is no more accepting old notes. The donation, whichever is coming, is in lower denominations of Rs 10 or Rs 20. Though the temple has a technical team as well which looks after online transactions, we believe there has been less donations in the last few days.”

Jamal Mohammed, who runs a food stall and cater food for people in bulk who wishes to feed the hungry and poor, said that there has been a steep fall in business. Once the busiest dargah is now witnessing thin lines of devotees. Our sales have dropped all time. “There is a drop of over 30 percent in the devotees foot fall post demonetisations. People are apprehensive to come to temples or dargahs as they have only limited cash in hand to manage,” said one of the dargah committee members.

Nothing much has changed for Sethi, spokesperson from Chhatarpur temple due to demonetisation. “The temple is functioning as usual with a little low attendance. As far as fall in the footfall, we haven’t noticed a fall in the last couple of days. The temple offers free parking, no charges for prasad etc. therefore for us situation remains more or less the same.”

Nonetheless, amid all the cash crunch, low foot fall and dip in donations, the Kalkaji temple in south Delhi has gone e-way by opening their wallets via paytm to accept donations. Atul Bhardwaj, a priest from Kalkaji told Asian Age correspondent, “There has been a major slowdown in the rush. The donations have been dipped by over 50 percent, which has severely hit the functioning of the temple. In a bid to combat the problem, the temple management introduced e-wallet donations. The ardent followers and devotees are now making donations via paytm to us. They scan the code and sent to the registered mobile number. So far, we have managed to get fair number of donations.”