Delhi deputy chief minister Manish Sisodia said the decision to shut schools will be taken “when the need arises.” 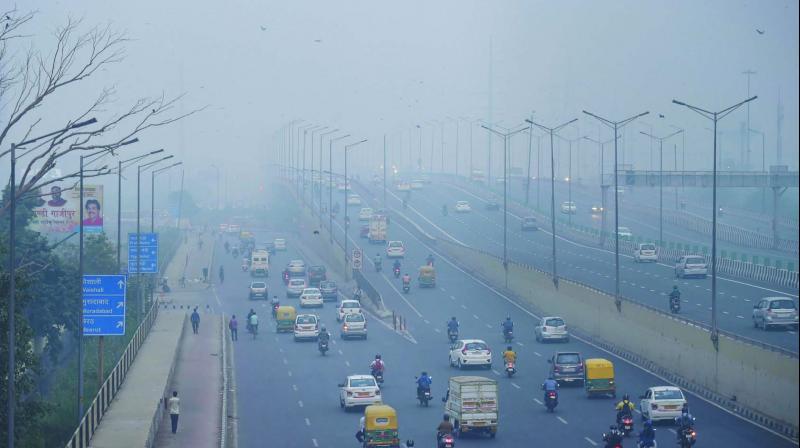 New Delhi: The air quality in Delhi remained in the ‘severe’ category, on Thursday morning, with smoky haze lingering over the national capital for the third consecutive day and becoming a serious health concern for the residents.

Doctors have advised people to take lots of precautions, including wearing face masks and avoiding early morning and late evening walks, as concentration of pollutants is at its highest during this period.

Delhi deputy chief minister Manish Sisodia said the decision to shut schools will be taken “when the need arises.”

In November 2017, the government had shut the schools for a few days due to deteriorating air quality.

According to the ministry of earth sciences’ air quality monitor, SAFAR, the overall air quality of Delhi continues to be in the severe category. The calm surface wind prevailing for the last two days has led to strong surface nocturnal inversion and accumulation of pollutants.

The stubble-fire count in Haryana and Punjab has increased. SAFAR said that the share of stubble burning in Delhi’s PM2.5 concentration was 27 per cent on Thursday and is predicted to be 25 per cent on Friday. On Thursday, smoke from crop residue burning accounted for 35 per cent of Delhi’s PM2.5 pollution, the highest this season.

SAFAR said the transport-level wind direction is likely to remain northwesterly, which is favourable for plume transport, for the next three days. “An increase in surface wind speed is expected on Thursday. AQI is likely to improve slightly on Friday,” it predicted.

A fresh western disturbance as a trough runs roughly along the Afghanistan-Pakistan border as of Thursday. It will approach Northwest India by November 2.

“It is likely to influence Delhi’s air quality positively. An improvement to the lower end of the ‘very poor’ category is expected by November 2,” it said.

Weather experts said that Delhi’s problems aggravated due to an unfavourable wind speed post Diwali, which led to the accumulation of pollutants. They said that there is likely to be some relief on the weekend.

The AAP government has identified five “critically polluted” areas after examining the post-Diwali pollution data and asked the municipal corporations and the Delhi Pollution Control Committee to intensify actions at these locations.

The AQI takes into account five chief pollutants—particulate matter with a diameter of less than 10 micrometres (PM10), PM2.5, ozone (O3), nitrogen dioxide (NO2), and carbon monoxide (CO). The higher the AQI value, the greater the level of air pollution and health concerns.