This particular python might have wandered out of the small forest area behind Rajghat. 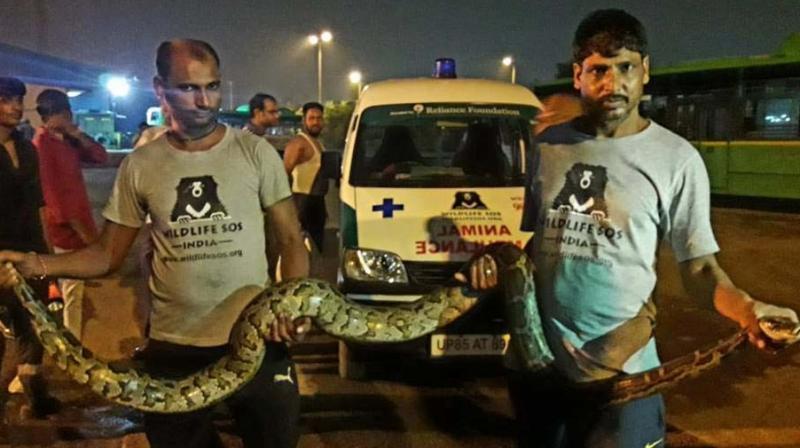 New Delhi: A 10-foot-long Indian rock python was rescued from under a bus at the DTC Raj Ghat depot. One of the bus drivers was filling up CNG on Thursday night when he heard something moving under the bus but little did he expect to find a massive python resting underneath.

The authorities then called NGO Wildlife SOS, following which two rescuers arrived and extricated the python and transferred it to a safe transport carrier. Lokesh Kumar, an employee at the Depot said, “The driver  heard a hissing sound coming from under the bus and decided to take a closer look. He was terrified by the unexpected sight of the gigantic snake and immediately reported the incident to us.” The python is currently under observation and will soon be released back into its natural habitat.

“Indian Rock Pythons (Python molurus) are very often mistaken to be dangerous because of their size, and face extreme thr-eat due to prevalent misunderstanding and ignorance among the public.

Not many people are aware that pythons are non-venomous, and these reptiles often get killed when they venture into human surroundings,” sa-id Kartick Satyanarayan, Co-founder and CEO of Wildlife SOS.

“Finding a python in urban areas is not uncommon. This particular python might have wandered out of the small forest area behind Rajghat. We are glad to see that people are becoming more sensitised towards these largely misunderstood reptiles and that instead of taking matters into their own hands; they immediately report such incidents to the authorities,” he added.