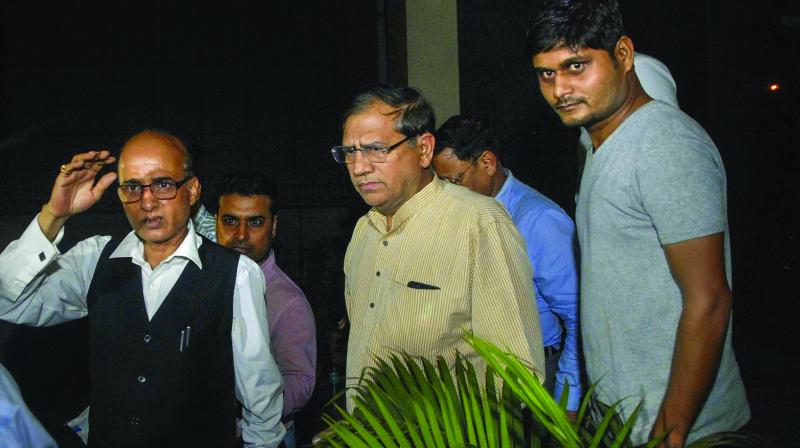 New Delhi: The Supreme Court on Thursday allowed the Delhi Police to arrest the Amrapali promoter Anil Sharma and two other directors Shiv Priya and Ajay Kumar of the real estate company from inside the court hall in connection with an economic offences complaint registered against them.

The top court, which is seized of several pleas of home buyers seeking possession of around 42,000 flats booked in projects of the Amrapali group, also ordered attachment of personal properties of the CMD and directors.

A Bench of Justices Arun Mishra and Uday Lalit, while ordering their arrest in October last in connection with a number of cases filed by aggrieved homebuyers, had said that they would be in the custody of the Uttar Pradesh Police and confined to a hotel till the completion of the forensic audit of their companies.

The Bench had directed forensic audit to find out whether the money invested by the homebuyers were diverted for some other purposes.

It had summoned the directors to seek information regarding the documents to be produced.

The Bench, while ordering the arrest told the Delhi Police: “We had never stopped any agency from arresting the directors, who are presently housed at a hotel under the direction of UP police.” On behalf of Delhi Police it was submitted that the three directors have to be taken into police custody in connection with a criminal complaint registered against them.

The Bench had earlier expressed its anguish over the conduct of the company, which has kept 42,000 homebuyers waiting for their dreams for years. It criticised Amrapali for committing fraud and misguiding the court and for criminal breach of buyers’ trust. The court was upset when the company submitted a proposal to deposit only `400 crore of the `4,000 crore that is needed for finishing its stalled projects. It told the company directors would be rendered homeless and be forced to look for homes for themselves, if they acted smart in front of the court. The court had also observed that a “big scandal” is taking place in the name of real estate business.

The Bench had, on October 3, 2018, entrusted National Buildings Construction Corporation (NBCC) to complete construction of 46,575 flats in Amrapali’s stalled projects.

The Bench also asked the state-run builder to prepare a detailed project report for pending projects within 60 days.

In the meantime, the Noida Authority and the Greater Noida Industrial Development Authority have seized residential as well as commercial properties of the realtor, including 5,000 flats.

At the outset, the bench inquired from the forensic auditors about the status of their probe and asked as to when they would be filing their reports.

The auditors said that various firms and their officers concerned, to whom the money was routed by the real estate major and its directors, have been evading  and not cooperating in the forensic audit.

“Can you give the list of persons and companies who are not cooperating with you,” the bench asked. On being told that there were 200 people or entities which were evasive, the bench divided them into three groups and asked them to positively appear before the forensic auditors on March 5, 6, 7 and 8.

Earlier, the apex court had grilled the CMD for the fact that `94 crore of home buyers was being shown in his personal bank account.

The bench had warned the CMD saying that it would send him to jail for his “reluctance” in disclosing the identity of a person, who had bought company’s shares worth `140 crore from the multi-national firm JP Morgan.