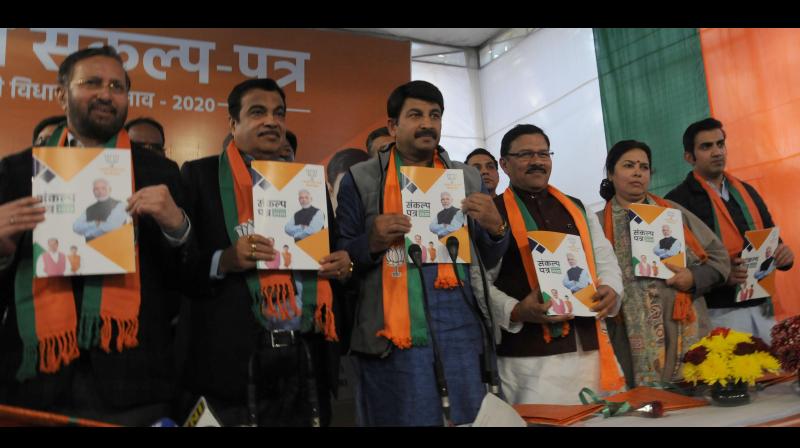 New Delhi: The BJP on Friday released “Delhi sankalp patra”, its manifesto for Delhi Assembly polls, promising good quality wheat flour at 2 per kg for the poor and supply of clean drinking water to every household.

The party also promised free electric two-wheelers for the college-going girls and cycles to Class 9 and 12 students belonging to the economically weaker sections (EWS) of the society. The 56-page document has a large picture of Prime Minister Narendra Modi — the face for BJP for the Delhi Assembly elections. The cover page also has the picture of BJP president J.P. Nadda and city unit president Manoj Tiwari.

Eyeing its traditional vote banks of trading community, the BJP proposes conversion shops and offices from leasehold to freehold on priority basis. The party also promised that streamlining of regulatory and approval process to ensure obstacles free functioning of three lakh household industries. On sealing, the BJP promises to take all administrative and legal measures to address the issue.

After releasing the poll promises, Mr Gadkari said that with the BJP government will run the “bullet train” of development in the city. “BJP’s history is linked to Delhi. The future of Delhi will be changed by the BJP,” Mr Gadkari added.

Mr Tiwari said that the BJP will continue the same subsidies in power and water currently in place. “BJP is not going to reduce any benefits people are already availing.”

Sharing the key promises, Mr Tiwari said that the BJP will take all necessary steps to provide clean, corruption free and transparent government in the city. After giving ownership right to 40 lakh property owners in unauthorised colonies, the saffron party, to consolidate its votes in these colonies, promises setting up a dedicated “colonies development board” to formulate development plan for these colonies.

The sankalp patra pledged to increase budget for education and health sectors by 10 per cent annually. On education front, the BJP promises to open 10 new colleges and 200 new schools in the city. The party also talks about opening of a ‘Sanskrit Board’ for the promotion of Sanskrit language and incorporating Yoga, positive health, mediation and value based learning as part of education system.

The saffron party promised that its government after coming to power implement Centre’s flagship programme “Ayushman Bharat Yogna” and “Pradhan Mantri Awaas Yojna”, which is currently not implemented by the Arvind Kejriwal government. For providing better health facilities to Delhiites, the BJP promises to open 400 health and wellness centre under Ayushman Bharat.

For infrastructure development, the BJP promises creation of “Samriddh Delhi Infrastructure Scheme” with a provision of 10,000 crore for key infra projects like roads, flyovers, footover bridges and others.