Pedalling his way to Leh

P.K. Prasanjith is an avid cyclist who is planning to cycle to Bangkok. 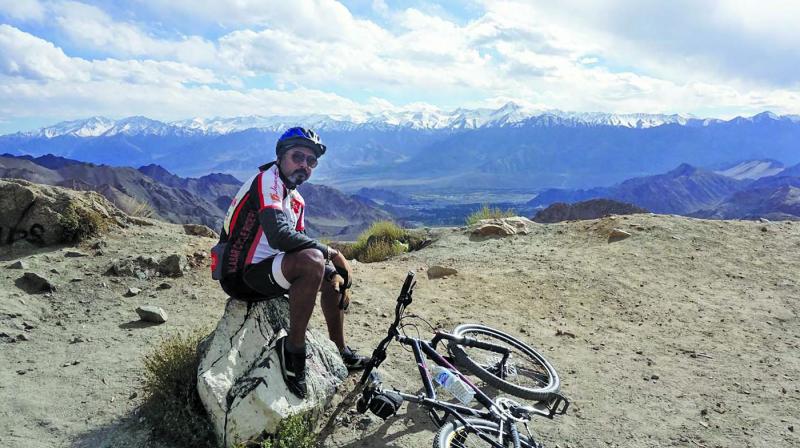 The change was profound as he soon started to explore long distances on his cycle.

About five years ago, P.K. Prasanjith took a pit stop near a wayside tender coconut shop during his motorcycle trip to Goa. He met two Italian tourists, who were on a cycling trip across the country, at the shop and the conversation he had with them changed his life forever.

After returning to Kozhikode, his hometown, the motorist decided to switch to cycling. The change was profound as he soon started to explore long distances on his cycle. The initial destinations were hill stations in south India and finally he decided to feel the rough Himalayan terrain. His determination helped him to cycle through Khardung La pass in Leh.

“It was a tough experience. There are several differences between cycling and a motorbike trip. When you cycle, you feel you are closer to the destination. Though it is physically draining, it gives you immense pleasure and a sense of confidence,” he says.

“Anyone who has skill can ride on bike but if you want to cycle long distance, you need the stamina and determination. It is a stress reliever and confidence booster. I quit smoking to travel on cycle. The conversation with the Italians gave me the confidence to do it,” says Prasanjith.

His daughter Meenakshi is also into cycling. “She is into professional racing and has been training at SAI, Thiruvananthapuram, for the past one year. After I started to cycle, she also took part in some rides and got interested in the sport. We have become a cycling family now,” he quips.

The change also made him to see everything from an environmentalist’s perspective. “When you travel on cycle, you feel more close to nature. Our club, Calicut Pedallers, is going to organise a number of events along with the Forest Department to bring awareness among people about nature,” he said.

He is planning to cycle in Bangkok. “We have identified a route on the outskirts of Bangkok. Other than cycling, I am also looking to visit the Everest Base Camp,” he shares.