Cars hummed on bridges overhead and to the right loomed the massive blue port of Kochi. 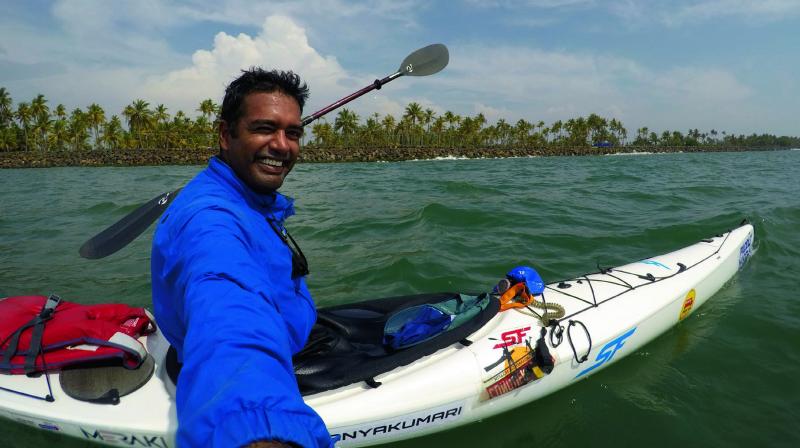 The rain seeped through and I was soon cold and damp.

The tides are strong and rocky patches can break your kayak. Strong winds blow you off course. Thanks to it all, my average speed is 6 km/hr. So when, on day 73 of my 3-month Kayaking expedition along the 3,000-km west coast of India, I could use the calmer backwaters of Kerala, I said — Why not?

I was going to kayak Kerala’s largest backwaters, north of Kochi and 90 km south to Alleppy. I would do it over 2 days. My confidence was high. I did a morning interview and posed for some stunning shots. I launched 3 hours late, for the first time with a shore on either side of me. Cars hummed on bridges overhead and to the right loomed the massive blue port of Kochi.

I entered the harbour and gigantic boats left me in their wake. In the backwaters, every path looked alike and I lost time finding my bearings. The afternoon kicked in and another truth dawned on me. After 5 hours I’d only completed 22 km. I had 20 km to go with the tide against me. I also found I was short on food and water. I was burning up in my jacket. As I took it off, a storm hit. The rain seeped through and I was soon cold and damp.

Then, by the bank I spotted him. He was standing in the rain, flailing his arms around. Uncharacteristically, I approached, to hear him say – ‘Bada barish. Aap ruko. Fir jao.’ (A storm is coming, please wait it out.) Such was his sincerity and so beaten was my state that I parked alongside his boat — my body cold and hurting and dehydrated. Over his shoulder, his brother questioned – Lunch kiya? I mumbled, ‘No’.

A wave of worry washed over their faces, and the next thing I know  they’re helping me out of my kayak, and I’m walking to their small house. There, I was given a fresh plate of rice and curry and fish. I answered questions and showed the kids my gopro. As the storm cleared, Raj helped me back in the kayak and bid me goodbye. The next 18 km were the easiest I’d done on this trip. It’s day 73 and we are close to the end.