History resides in the walled city, and so does devout faith... 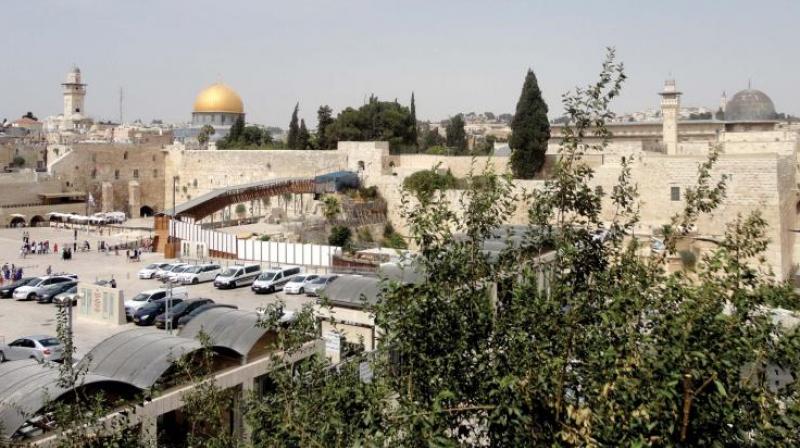 The skyline of the city.

Encounters of the faithful follow your thoughtful footsteps into the old city of Jerusalem, treading the ancient slopes towards the golden-hued walled city, where history and religion are indelibly etched into the fabric of its existence. The Temple Mount, Al-Aqsa Mosque, Tower of David, and ruins, are all a foray to understand this land ravaged again and again, that still stands resolute, a lesson in life itself. The State of Israel came into being in 1948, and this Jewish state today holds within it empires, legacies, faiths and sanctity. A mere walk cannot unearth its history, or its allegiances. But one must try — so we tread the cobbled streets of calvary, past the tunnels to the Western Wall, and it does live and breathe in faith. The old city is divided into four quarters which geographically represent different faiths, but in reality are more intertwined with Christians, Muslims and Jews living together in harmony. With its 6,000 (some say 4,000) year-old history, Shelly Ishkoli, our storehouse of knowledge guide explained, “You think that the walls of Jerusalem go back thousands of years. Not exactly. Every time someone conquered Jerusalem, they broke its walls, so it was built and rebuilt. This wall by the Ottomans, who were Muslims, has flowers, Arabic letters, geometric shapes decorating it. The architecture gives us a hint of the weaponry used in that period — narrow windows for bows and arrows.”

We started our journey though the Jaffa gate. There are eight gates each named after the city it leads to (ours led to Jaffa - Jaffa Tel Aviv today). As we walked to the Tower of David, with its golden haloed ruins, we swooped through an exhibition of 4,000 years of Jerusalem at the Museum of History. It reflects the sanctity of this holy city that has three monotheistic faiths — Christianity, Judaism and Islam. We also saw the popular three dimensional light and sound show in the evening. The beige walls of the citadel morph into stories from the past, evoking images of its rich history. And the city itself is haloed in yellow at night, a wonderful sight, and walk.

We trudged to a vantage point to see the dome of the Al Aqsa Mosque, an important Muslim pilgrimage. Al Aqsa translates to “farthest mosque” and also refers to a chapter in the Quran — The Night Journey where Prophet Muhammad travelled from Mecca to “the farthest mosque,” and to Heaven. One can also spot different church orders spires and far off is a brush stroke of green in this arid desert where a spring used to be. In ancient times, a mezuzah used to guard homes — A metal cylindrical box with the script from the Torah blessed in a ceremony, inside. There are indelible marks on many a wall in the Old city where the mezuzah used to be.

Passing which was the Main Street in Jerusalem, the Byzantine Cardo in the Jewish quarter, arts and crafts peek through old stones and tunnels. The Jewish quarter has shops, small galleries, ceramics, all winding cobbled streets into the market area which is a hub of souvenirs and T-shirts touting Israel’s military prowess. Ambling in the sweltering heat, we entered the sacred site of Catholic religion, the Church of Holy Sepulcher which lies inside a square with steps on either side where many sit in contemplation. It is said to commemorate the hill of crucifixion and the tomb of Christ’s burial. Which ever faith you belong to, the stark simplicity of its stoned walls, lack of opulence and earthy essence all emanate a sense of peace and quiet that settles in one’s heart. The throngs of faithful walk past, pray in silence, light candles, some leave small prayers on paper as they enter the inner sanctum sanctorium. Powerful is the sense of peace as one lowers towards the silver gilded disc, where the cross is believed to have stood…

The city’s Christian and Muslim quarters are enmeshed in each other, and as you bag souvenirs from the Souk el-Dabbagha, a street selling religious souvenirs, you are once again humbled by the history that surrounds you.

We walked past a huge gold Minerva towards the Western Wall or the Wailing Wall — the limestone wall filled with signs of prayers and devout faith, a congregation of young and old praying and weeping, some with a Torah, others with prayerful notes. Dress conservatively. Wash your hands at a water fountain and walk towards its time honoured grooves. Spend moments in silence, then without turning your back, walk away in prayer. There were cartloads of Jewish school girls and teenagers and we were taken aback by immense faith of these Judaism students. Our Canadian guide David took us through the tunnels, and the history of the Western Wall — explaining the mammoth task that the Israel government has undertaken to excavate tunnels to the Temple Mount (what the faithful consider as the Holy of Holies). A sheer gargantuan task indeed, as we mulled at its turmoil filled history, and in contrast, this peaceful walk of pilgrims to the holy land, that leaves one seeking refuge in faith.

The Western Wall is 488 metres. The tunnels, cooled by the welcome breeze of aircons, in we walked, past Warren Gate where a synagogue used to be, named after Charles Warren, who discovered it. One can see different eras of stone, engravings, lessons in time… as sunlight suddenly illuminates the dark alley, and we are out into the other side of the old city, where the stations of the Cross, which Christians revere keep us company. A Muslim quarter, with its heaps of dry fruits, olives and ceramic work. Our guide Shelly Ishkoli also mentioned the Christmas tours that are very popular, the Catholic and Jewish traditional ones, when the weather is cold, not sweltering like it was in July, which turn this already haloed city into a twinkling sight of revelry and prayer, ringing in carols.

Strong inherent and deep belief, faith and irrevocable history resides in Jerusalem. We see a few Jewish children flying their coloured balloons and running pell mell back home from school, smiling. And that’s what we’d like to take back with us, where children run smiling, and peace prevails… Toda Raba (thank you) Jerusalem.