Here are the marquees you must visit this Ganesh Utsav. 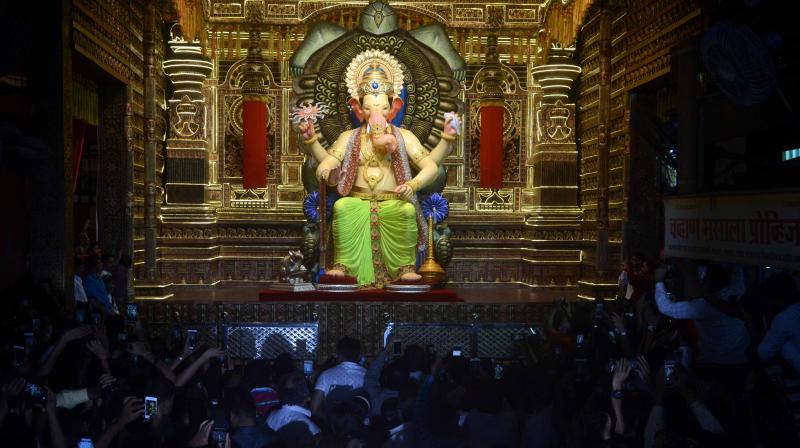 Mumbai’s favourite festival, Ganesh Chaturthi has fallen on 25th August this year. For 10 days the entire city will celebrate the homecoming of the much-loved elephant-headed god, Ganesha. Each year organisers and artisans try to outdo each other in creating a spectacular experience for devotees to see. We list 5 such pujas which, being some of the oldest and biggest, you should not miss.

Lalbaugcha Raja: Founded in 1934, the King of Lalbaug has grown to be one of the most visited pujas in the city. The Kambli family, of Kambli Arts, has been making the idol since 1935 and its legendary design is patent protected.

2017 theme: The idol has been made to resemble Lord Vishnu’s second avatar and has a golden palace serving as the backdrop. The throne on which he sits has a huge tortoise serving as a background, signifying longevity.

Best time to visit: It's open around the clock. However, the busiest time is in the evening until midnight.

Andhericha Raja: This idol is to the Mumbai suburbs what Lalbaugcha Raja is to South Mumbai. Established in 1966 by workers of the Tobacco company Tata Special Steel and Excel Industries Ltd, the idol is not as towering like some of the other places butr it has a reputation for fulfilling wishes.

2017 theme: The Ballaleshwar temple of the famous Ashtavinayak trail in Pali village, Maharashtra.

Best time to visit: Evenings are busiest, however devotees have some extra time to see the God. The idol is the only one in Mumbai to be immersed on Sankashthi Chaturthi, which is about five days after Anant Chaturdashi (the last day of the festival when large idols are commonly immersed).

GSB Seva Ganesh mandal: Affectionately called Mumbai’s gold Ganesh, the idol is adorned with 60 kilograms of gold. Often stated to be the richest in the city, it was founded by the Gowd Saraswat Brahmin community from Karnataka in 1954. The mandal houses an eco-friendly idol and plays traditional Indian musical instruments used in south Indian temples are played.

Nearest station: Kings Circle on the Harbour Line and Matunga on the Central Line.

Best time to visit: This Ganesh idol only stays for the first five days of the festival, so one has to visit it early.

Mumbaicha Raja: The Mumbaicha Raja, in Ganesh Galli (Lane), is located only a couple of lanes away from the Lalbaugcha Raja and is also very popular. The mandal usually has lavish new themes every year and replicates a famous place in India. It was formed for the benefit of mill workers in 1928 making it one of the oldest as well.

Best time to visit: Usually busy, peak hours are in the afternoon and night from 3 p.m until 2 a.m.

A post shared by Chinchpokli Cha Chintamani (@chinchpoklicha_chintamani) on Aug 13, 2017 at 12:12am PDT

Chinchpokli Chintamani: One of the oldest in the city, the idol here is 16 feet tall and is atop a five-foot peacock throne. Adorned with 5kg gold, the mandal wants devotees to donate money instead of offerings which can be later used for a medical centre.