The festivities at Thiruvairanikulam are a must-have experience. 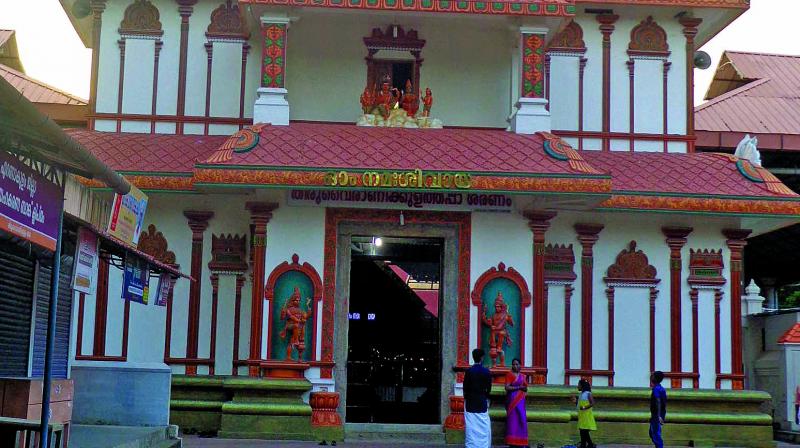 The Thiruvairanikulam Mahadeva Temple on the banks of the Periyar in Sreemoolanagaram near Aluva has a speciality. This Lord Siva Temple has a shrine for Goddess Parvathi which will be open for devotees only for 12 days a year. The Nadathurappu Mahothsavam happening every year on the Thiruvathira day of Malayalam month Dhanu, fell on January 11 this time. On the auspicious day, a grand procession starting from Akavoor Mana carries the sacred ornaments of the Lord and Goddess to the temple.

Legend
The lore has it that Goddess Parvathi used to cook food for Lord Shiva in the (Thidappilli) temple kitchen during which none was allowed inside. One day, an inquisitive Brahmin entered the temple, much to the anger of Parvathi, who left the temple. The Brahmin apologised and performed poojas to please the goddess who agreed to be present at the sanctum sanctorum for 12 days in a year. The Siva idol faces the east and Parvathi idol faces the west. During the festival, the Goddess’ idol is decorated with ornamental silks, pattu, thali, turmeric powder, Swayamvara Archana, Valkannadi, Nelpara, Malarpara, Aripara, Sarkara para and other offerings like thrimadhuram. The darsan believes to bring good fortune to devotees, especially to unmarried women. Thiruvathirakkali is performed at the temple as part of the festivities.

During the 12-day festival, people across the country converge at the temple for darsan. Devotees have to stand in queues for more than five hours to get a darshan of Parvathi. Woman devotees arrive for the auspicious Makam Thozhal ceremony hoping to get a good husband and long married life. The festival ends with an ‘Arattu’ of the idol in the Periyar.

Ashtamirohini, Prathishta Dinam, Navarathri etc are the other important festivals held in the temple. The temple also has shrines for Nandi, Ayyappa, Ganapathy, Vishnu and Durga. The temple administration is managed by the Thiruvairanikulam Mahadeva Trust. The temple opens for darshan on early morning and closes at afternoons to reopen in the evening. This year’s Nadathurappu festival ends on January 22.

How to reach
The temple can be conveniently accessed from Aluva, Kalady, Ankamaly and Perumbavoor towns. The new bridge built across Periyar provides ease of access from Marampally junction.
(The author is a lecturer in Tourism, School of Tourism Studies, Mahatma Gandhi University, Kottayam)