Chail: a city of scenic beauty

Maharaja of Patiala made Chail his summer capital when the British banned him from entering Shimla. 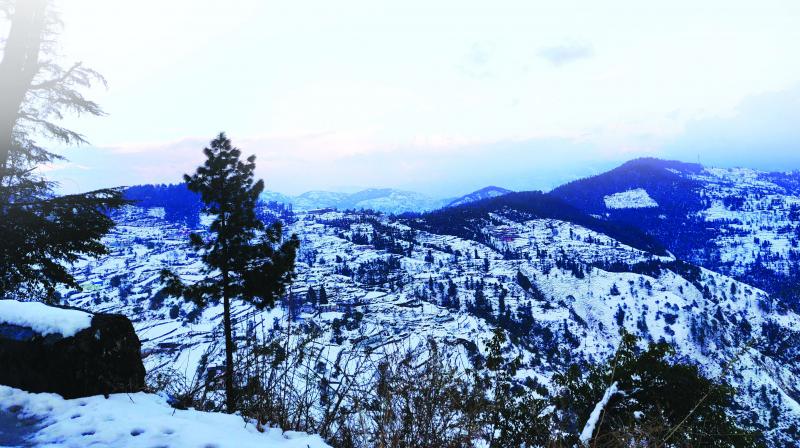 First glimps of the snowy peaks as we neared Chail.(Photo: Radhika Vashisht)

When you talk about visiting Himachal Pradesh as your quick weekend getaway from Delhi and Chandigarh then Shimla is a city that gets maximum publicity. However, if you are an enthusiast traveller like me and want to explore beyond the hyped tourist places then Chail is a go-to tourist destination as it provides less congestion, breathtaking peace and of course the scenic beauty, which is magnificent.

We started from Delhi somewhere around 6:30 am on Friday and reached there around 7 pm. (we would have reached little earlier if we wouldn't have stopped at every possible place to explore).

Located at a higher altitude than Shimla, Chail has a very interesting story. Maharaja Bhupinder Singh of Patiala made Chail his summer capital when the Britisher banned him from entering in Shimla. He first built a palace near Khandaghat called Chail View Palace and then built a road to Chail and finally his own summer retreat in this little town surrounded by deodar forest. Ironically, Britisher allotted Chail to the Maharaja for his assistance in the Anglo-Nepalese War.

We went there in February with -7 degree Celsius, so we had a chance to see the snowy road and amazing snowfall.

When we crossed Solan, which is 45 kilometre before Chail, The road was already covered in snow and due to that, the road was a little slippery. So if someone is planning to go to this beautiful city during winters at this time then avoid going there by car (until and unless you are a good driver).

We stayed at a hotel that was 3-4 km up from Chail.

Next morning, we planned our day accordingly and went ahead to see Chail Palace, the Palace is set approximately in 75 acres and has a truly regal setting with spectacular views.

Today, this Palace can be experienced by everyone and is run as a hotel. Himachal tourism, who now owns this gracious mansion made sure that this palace still has nostalgic and modern day conveniences.

Apart from being famous for an amazing architect, this Place is also famous for its amazing food. Restaurant in this Palace offers good Himachali food, and when visiting here, you should definitely try sepu badi, chana madra and methi naan

After Chail Palace, we went ahead for Stoned Kumbh Shiv Temple. Tucked away from the hustle and bustle of the main city, this Shiv temple is situated on top of a hill station which is located at a serene spot.

This temple was built single-handedly by 64-year-old Satya Bhushan, and it took him 38 years before completing this beautiful stone sculpture. According to the locals, he started building this structure in 1980 on his ancestral property after seeing a Shiv Temple in his dream. The shrine is also called "Temple in my Dream". Being made of solely cement-metal wires, the temple is colourless.

There is another tourist attraction, Kali ka Tibba, where we stopped at the last day of our trip. Here, the view of the sunset will simply blow your mind. This place is situated on top of a Hill and there is Kali Mata temple built on the top; hence the name is Kali ka Tibba. From the top, you also get a breathtaking view of Choor Chandani and Shivalik Range.