Aditya N.C. shares his experience of going on a four-day cycling tour, which cut across some exquisite parts of Karnataka. 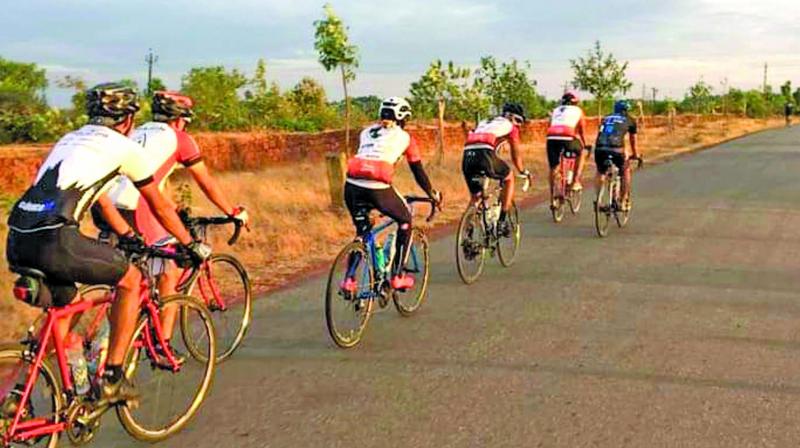 Karnataka not only reminds one of the rich cultures and traditions it symbolises, but is known for its beautiful hill stations, monuments, ghats, and more. When the thought of going on a tour around this alluring state strikes one’s mind, cycling may not be their first choice or even last choice of commute. But Aditya N.C. would have it no other way. In a four-day tour, 36-year-old Aditya and a team of 35+ riders covered a distance of 520 km, averaging around 130 km daily, organised by Cadence 90 in its fourth edition.

He says, “TOK (Tour of Karnataka) is a four-day cycling tour which cuts across some of the exquisite parts of Karnataka to a large extent unblemished commercially, which is the best part. These places are handpicked by Cadence 90 who has a terrific knowledge of the landscape and routes that suit a cyclist, from an amateur to a professional. The whole journey is like traversing through the cradle of nature – the ghats, valleys, stillness of river valleys, wildlife and great Uttara Karnataka people and culture.”

Delving deeper into the details of the tour, he says, “Hassan to Shimoga was a 150-km ride, the only part of the entire tour where you will find some traffic. On day two, we travelled from Shimoga to Honnavar; scenic rides begin from here as we get to the ghats and cycle up and down towards Honnavar. Breathtaking views awaited us as we passed by Jog falls, Yana, rocks, cut across the Sharavathi valley and climbed through the best part of Western Ghats. On day three, we covered the distance from Honnavar to Sirsi. It was the day of climbs; seven-km-long Devimane climb and bundle ghats tested our speed, endurance and strength. This followed some lip-smacking ever so famous local food like misal bhaji, pulao and Mangalore buns. We started day four, the final stretch of TOK, with some amazing breakfast – Khotte Kadubu cooked in jackfruit leaves with coconut chutney. We cycled through Kali forest reserve and finally ended our tour on the banks of river Kali at Ganeshgudi – home of the world famous hornbill birds.

Cycling is not a preferred choice of transport, especially when it comes to travelling long distances, because there is an assumption that it might not be comfortable. The thought of cycling through rough
terrains might even run a shiver down one’s spine, but Aditya vouches for the ease of the journey.

“It was a very well organised tour. The registration process concluded a couple of months prior to the tour and they ensured that we have a good understanding of the terrain. They also had training schedules planned for us which a beginner to a pro can train on. The terrain had everything that such tours should have – we had the peaks, valleys and the troughs. There were also segments for the strong riders to chase and clock the best timings which made it exciting for everyone. For me, the best way to overcome the challenge was to stay hydrated to ensure that I am replenishing the salts in my body; that kept me going throughout. Also, some great food kept the team going. There was a 13-year-old boy who cycled with his dad. That was so inspiring for all of us!” he says.

Using the right cycle is the key to ace such a ride. Aditya rides a Merida Scultura-300 road bike, which he graduated into from a hybrid bike. It eases the process of climbing and at the same time with the race geometry, it helps you ride fast.

He concludes by letting us in on when he started cycling and what kept him going. “I started cycling to keep myself fit and drive away the perils of desk job and corporate life. I had put on a lot of weight and was not finding time to hit the gym. Commuting to work on cycle was the best option. Having the right bike and company made all the difference for me. I kept myself engaged regularly, with weekend Thindi rides and suburban rides, which naturally helped me mature as a cyclist.”