This adventure motorcyclist plans to cover the west coast of the country and touch the tip. 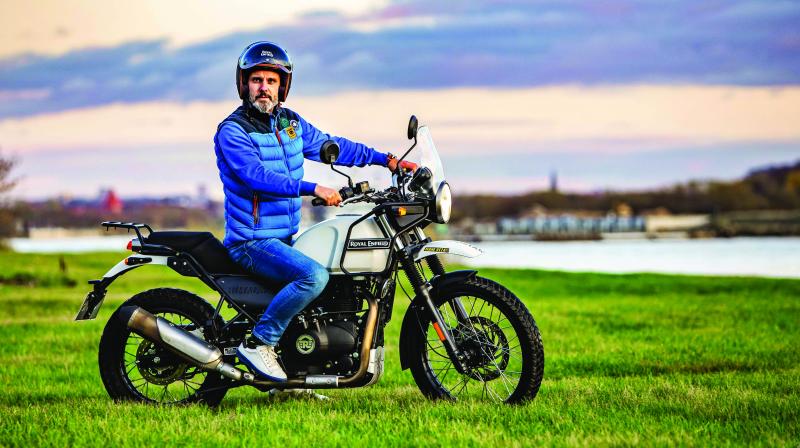 Oprah Winfrey said, “Passion is energy. Feel the power that comes from what excites you.” For someone who is a motivational speaker and a passionate biker from Lithuania, his yen for riding is what pumps his adrenaline rush and gives him the oomph factor to go on. This 37-year-old biker is presently amid his tour along the west coast of the country starting from Goa. We caught up with him for a chat and here’s what he had to say.

Karolis shares the reason that he chose to visit the country he says, “I have heard great things about India and was keen on visiting. I intend to meet all the local biker communities and listen to their experiences. I have met a lot of interesting people so far and look forward to meeting a lot more.” Speaking about his current biking tour he adds, “Riding along the west coast has been fun. I want to ride further down South and reach the tip of India — Kanyakumari. The whole tour covers over 3,000 kilometres. I initially estimated to drive 1,000 kms in a day however I underestimated the traffic in India. I can only ride a rough 350 km in a day.”

Karolis believes that riding a bike equates to an active form of meditation where the mind, body and soul are in unison! Reminiscing his childhood, Karolis speaks about his love for biking. He says, “I grew up being part of the Soviet Union and at that time we weren’t freely allowed to travel outside the country. However, my aristocratic father took us to Germany for a vacation when I was six-years-old. Starstruck by the German bikers who stacked up huge boxes of essentials with a rugged look, I decided that was my calling. And at the age of 12, I persuaded my father to buy me a bike who after a lot of contemplation bought me my first bike and there was nothing stopping me.”

Speaking about his most recent adventure of riding around the world in 40 days and taking the challenge a notch higher by participating in what is tagged as the world’s coldest bike ride, he says, “It was an exhilarating experience and anything that gives me an adrenaline rush is what grabs my attention. I did not eat or drink much and survived only on food supplements which also enhanced my energy to withstand the weather and changing climate. However, the ride across the Road of Bones at -40 degrees didn’t seem all that morbid as the name suggests but I did face a few problems with my bike. From adapting to different time zones to multiple break downs I managed to go around the world in 40 days. I got to meet a lot like minded people and Lithuanians worldwide and the fun we had together was what I carried back with me.”

Karolis doesn’t believe in working out in the gym and so his main mantra of staying fit is regular exercise. Speaking about Indian men he says, “I have noticed that most Indian men are careless about their fitness, they must exercise to stay healthy because their women need them.”