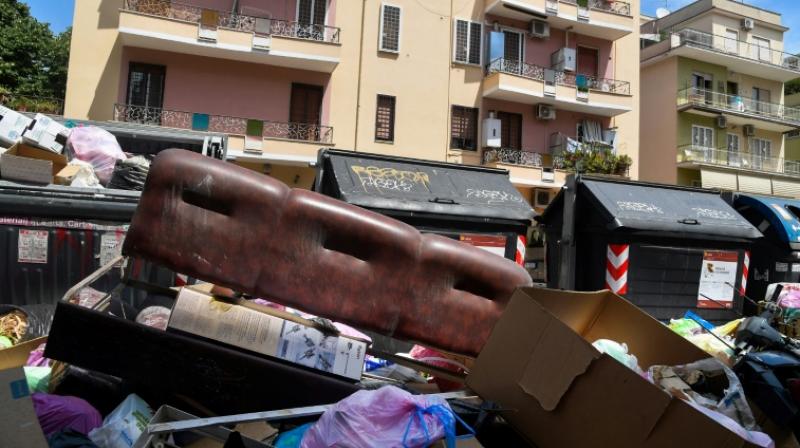 Some residents make matters worse by simply dumping their old mattresses, fridges and sofas next to garbage bins. (Photo: AFP)

Landfills in flames and rats feasting on waste in the streets have sparked health fears in Rome, as doctors warn families to steer clear of disease-ridden curbside garbage and locals launch a disgusting dumpster contest online.

Crowds of summer tourists are forced to navigate overflowing bins in the stifling heat, as the pungent perfume of neglected garbage draws scavenging animals and the threat of disease to the Eternal City and locals fume over the city's refuse management.

Rome's chief physician Antonio Magi has issued a "hygiene alert", telling AFP this could be upgraded to a health warning, with disease spread through the faeces of insects and animals banqueting on rotting waste.

His warning prompted local prosecutors to open an investigation this week into the city's refuse collection.

In the meantime, furious Rome residents have launched a contest on Twitter to find the most fetid dustbins.

Discarded pizza boxes or the remains of spaghetti lunches and fruit rinds draw opportunistic seagulls, rats and even wild boars to the streets of Rome, with wolves also spotted closer to the city's outskirts than ever before.

Adding to the indignation of Rome residents is the steep price they are paying for their garbage to rot in the streets.

The city spent more than 597 euros ($670) per inhabitant on household waste treatment in 2017 -- by far the highest in the country, ahead of Venice (353 euros) and Florence (266 euros), according to a report by the Openpolis Foundation.

But the city lacks infrastructure: of its three main landfills, one has closed and the others were ravaged by fire in recent months.

And two biological treatment sites have reduced their activities for maintenance work.

Some residents make matters worse by simply dumping their old mattresses, fridges and sofas next to garbage bins. But local Salvatore Orlando, 50, told AFP the council was entirely to blame.

"Of course it's the mayor's fault. You certainly can't blame the citizens," he said. "They produce waste, they have to throw it away, and the public services have to collect it. It's simple. We pay taxes for it".

Rome's mayor and the president of the Lazio region both assured Italy's environment minister Tuesday that the crisis would be resolved "within 15 days". But to do so, more of the city's 5,000 tons of daily waste will have to be sent for incineration elsewhere.

"Everyone complains about waste but no one wants an incinerator. Instead, we take the waste abroad, to Austria, to Germany!", another aggrieved resident said, declining to give his name. Even Pope Francis has commented on the decline, lamenting in June Rome's "degradation and abandonment".

Italy's Interior Minister Matteo Salvini, head of the far-right League, has jumped on the chance to use the crisis as a political weapon against mayor Virginia Raggi, who hails from the anti-establishment Five Star Movement (M5S).

The stench and sticky pavements have given him ammunition ahead of the next municipal elections, scheduled for 2021.

But in a city where key sectors are riddled with inefficiency and corruption, residents will wonder whether Salvini has a magic recipe for resolving a situation that has stumped parties over the years across the political spectrum.

In the meantime, rubbish is just one more daily challenge in a city with countless potholes, trees that topple at the first gust of wind and buses that catch fire, if their engines start at all.